Ships in Halifax are bit like bananas - they come (and go) in bunches.


The tanker  Ridgebury Cindy A arrived off Halifax yesterday and waited at anchor until the berth at Imperial Oil dock 4 was clear. When Piltene sailed late this morning, the ship headed in. Docking was not to be - at least not right away - as two tugs were also needed for the followIng ship, Hapag-Lloyd's Berlin Express - and there are only three tugs to serve the port.

Dominion Diving's launch Halmar returns to Dartmouth Cove after disembarking the pilot from the Ridgebury Cindy A at the inner anchorage. 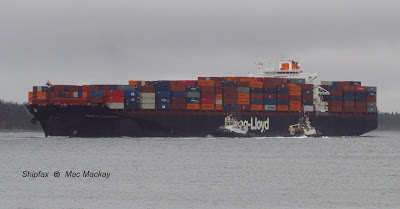 Berlin Express is a big ship, at 88,493 grt, 100,019 dwt and requires the most powerful tugs. As a container ship it also has priority and so the Atlantic Oak and Atlantic Fir took charge of the ship while Ridgebury Cindy A went to an inner anchorage. The container ship then went west of George's Island - one of the largest ships to to do so - to avoid the anchored tanker and the Woodside ferry. 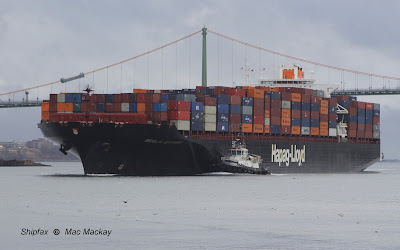 The sun began to peak out as the ship entered the Narrows.
Built in 2009 by Hyundai Ulsan, the ship has a capacity of 7506 TEU including 700 reefers.

After the tugs had shepherded Berlin Express to the Bedford Basin and tied it up at Fairview Cove, one of the tugs could be released to assist the third tug Atlantic Willow to dock the Ridgebury Cindy A. 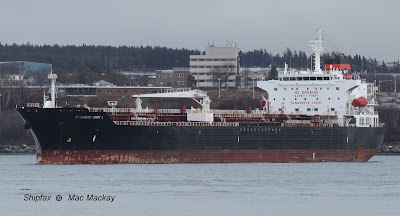 Built by SPP Plant + Shipbuilding Co in Sacheon, South Korea, as Yasa Ceyhan for Turkish owners in 2009, Ridgebury Cindy A has worked in the Norient Tanker Pool ApS of Hellerup, Denmark under its present name since 2013. It has typical tonnages of 29,905 grt and 50,162 dwt for a Mid Range product tanker


Surely these arrivals could be arranged with a little more finesse. Ridgebury Cindy A was put to extra expense by requiring one pilot inbound to anchor then an hour or more later another pilot from anchor to dock. It could have been done in one move if the arrival had been postponed by an hour.

While three tugs are normally enough to cover requirements in the harbour, it does result in delays from time to time. The business case for four tugs would be hard to make, but three tugs could handle all the work with better coordination.