Fairview Cove - back at work

It was a short holiday for the Fairview Cove container terminal . After clearing its last ship at noon time Saturday, the pier was at full swing again first thing this morning.

The big (old) post-Panamax Performance tied up at the west berth and the NYK Rumina at the east berth. 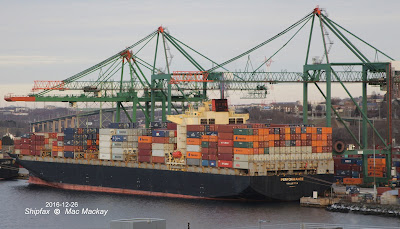 Danaos is one of the hurting  non-operating container ship owners (meaning they do not operate their own shipping line but charter ships to the line operators). They had eight ships with Hanjin when it failed, and have 24 charters to expire in 2017 and three more in 2018. Not only that they reduced their charter hire rates 20% on 13 ships to help save Hyundai Merchant Marine from collapse. Banks have extended waivers to Danaos until April, so the future of the 55 ship fleet is in limbo.

Performance is now with the G6 Alliance on its AZX service, but with the re-organization of that alliance in 2017, we may not see much more of this ship. [AZX=Asia, Suez, East Coast North America]

Out in Bedford Basin Fritz Reuter awaits its move tomorrow morning to Halterm. 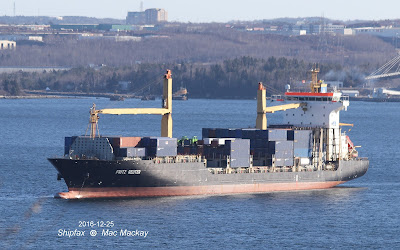 There was very litttle down time at the Oil docks in Dartmouth.

Piltene arrived in the late afternoon of December 25. It has been an off an on caller at Valero and Imperial Oil since 2014. Built in 2007 by the 3 Maj Shipbuilding Industri in Rijeka, Croatia, the 30,641 gret, 52,648 dwt ship is a nice break form the cookie cutter Korean  Mid Range [MR] product tankers we usually see. The Latvian Shipping Co of Riga also operates the tanker Latgale that was here last week.


The tanker East Coat arrived this morning at Irving Woodside.

One small correction to my Christmas Eve post regarding the supplier Skandi Flora. It did not in fact get a break of more than a few hours, for it sailed Christmas Day for the Stena IceMAX, however it returned to port again this morning.
The drill ship has moved much closer to Halifax for its maintenance work, meaning a shorter trip for the suppliers, which include Maersk Nexus (which also arrived today).