It was another big ZIM day at Halterm with two ships working. Zim Alabama was the first arrival, tying up at pier 42. Then there was the noon time arrival at pier 41 of a ship that is new to Halifax.

Juliette Rickmers is a 5,060 TEU (454 reefer) ship built in 2005 by Hanjin Heavy in Busan. Although delivered to Rickmers Group as Juliette Rickmers it was soon renamed Maersk Davao and was painted in Maersk colours until 2012. It then reverted to it original name.

Hemmed in as it was by cranes and containers, there was no clear view of the ship, but it is evident that the traditional Rickmers green hull paint that was applied over the Maersk blue, is in need of a touch up. (The ship's superstructure is still carrying the Maersk tan colour.) 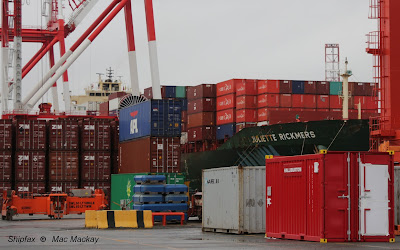 Although on ZIM service the ship is carrying a number of boxes for another Hamburg-based line, Hamburg-Süd.

The Rickmers Linie was founded in Hamburg, where the four masted barque Rickmer Rickmers, named for the founder, has been preserved. Built in 1896 it too carries the traditional green hull. 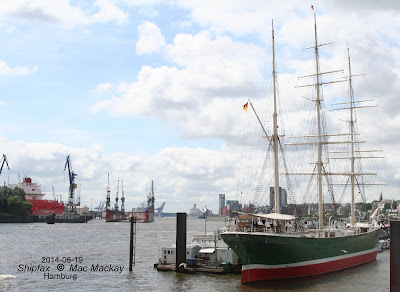 At left the Hamburg-Süd ship Rio Madeira is in refit at the Blohm + Voss shipyard, while Rickmer Rickmers draws crowds at its berth. 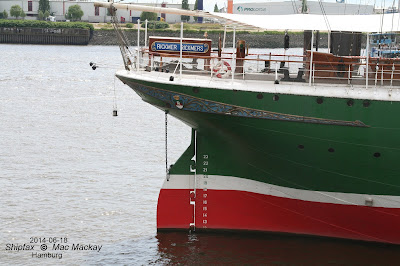 The beautifully restored vessel no longer sails, but is a major tourist attraction.


The Rickmers Group is now a multi-faceted organization, but a large segment of its business is to own and operate container ships under fixed rate charters. Its fleet now numbers 121, including eight 13,500 TEU giants. It has been particularly hard hit as its ships come off charters and with only low rates paying on new charters due to the slump in container trade.  Bond holders of Rickmers Maritime Singapore just rejected a $69 mn debt re-structuring plan, so the future is quite uncertain for the famous name. 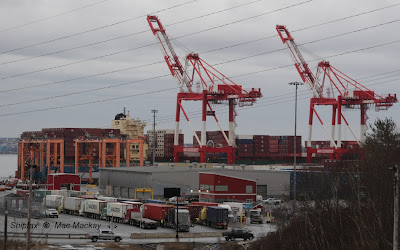 The ship's after deck was piled high with ZIM boxes.

Meanwhile ZIM has just announced a slew of service enhancements, although all the details have not yet been revealed. However there is something afoot based on the huge number of  ZIM boxes in storage in Halifax. ZIM has added a fourth Atlantic string, although it will not be calling in Halifax as far as I can tell. They are also saying that starting in April they will be upgrading their ZCP services, from Asia via Panama to the US east coast (and Halifax), so the Juliette Rickmers may be an interim ship on that route until larger ones come along. 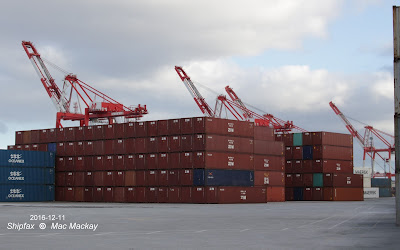 Stored ZIM dry boxes are piled up all over Halterm. 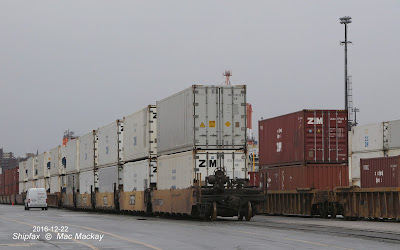 These are in addition to the reefers and other boxes arriving from sea and departing the same day by train.