There were two tankers in port today, both operated by Irving Oil.
The Marshall Islands flagged Great Eastern arrived Friday and tied up at Imperial Oil #4 dock.

Great Eastern at Imperial Oil dock #4.
This is an interesting development. The ship runs regularly from Saint John, NB delivering Irving's product to the US east coast. On this trip, after discharging it went on to Port Arthur, TX and loaded up on refined product for competitor Esso.

Then this afternoon the Canadian flagged East Coast arrived for the second time in a week.  The ship arrived last Saturday too, but that time docked at Ultramar. I believe it unloaded Ultramar product, picked up in Lévis, QC on the return leg of a trip when it delivered Irving product to St.Lawrence River ports. 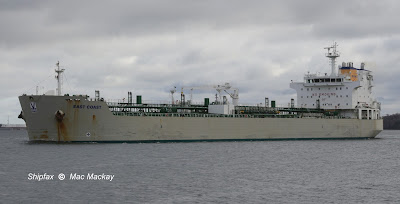 This is the first time I have had a close up look at the exhaust gas scrubber system, installed abaft the original funnel. Certainly an unattractive addition, but a necessary one to comply with emission regulations in Canada and the US. 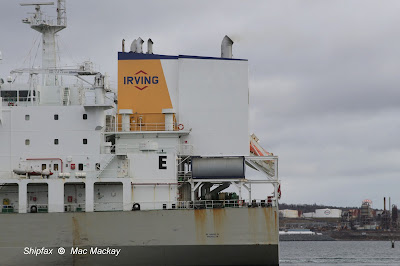 The white structure attached to the aft side of the funnel houses the exhaust gas scrubber.
The Irving tankers each carry the ship's initial on the superstructure. 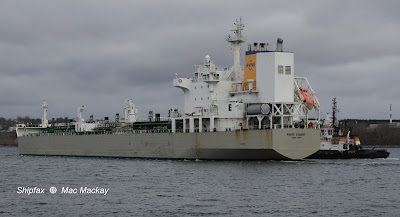 Tugs turn the ship for its approach to the Woodside pier.