Shell going for litterbug of the year award

Nova Scotia has become the latest target for the "let someone else do it" policy of one of the world's largest (and richest) corporations.

Royal Dutch Shell has recently come under fire in the UK for its oil well abandonment plans for the North Sea. According to reports, they will leave the remnants of oil platforms after decommissioning the actual oil production. These include three subsea structures each the size of the Empire State building according to one article. Another report says that the  Brent C topside structure weighs 36,000 tonnes, not including the under water concrete jacket, and that some of it will be left in place because no one knows how to remove it with current technology. Plugging and abandoning a well may cost GBP 10 mn but removing the structure from seabed to topside could be GBP 1 bn or more.

Low oil prices have meant that it is uneconomical to continue to pump oil from many parts of the North Sea. Companies are decommissioning wells even though there may be lots of oil left to recover. Removal of well structures in the harsh North Sea has never been done, and costs are impossible to estimate. The lack of any return to the oil companies' bottom lines means that they want to avoid costly removals, but this has created a toxic political environment. The UK government will also be on the hook for half the removal cost through tax rebates.
Offsetting this is the billions the companies have made pumping oil out of the North Sea, without planning for what happens afterward or setting aside funds to do the removals.

Now Shell wants to abandon  the dropped riser from their first well attempt in the Shelburne Basin off Nova Scotia. The drill ship StenaICEMAX dropped the thousands of feet of pipe last spring while trying to disconnect from the well in bad weather and it is still lying in a jumbled mess on the bottom. Citing a host of reasons for why the pipe should be left there, Shell cannot conceal the fact that they want to be spared the expense of picking it up. 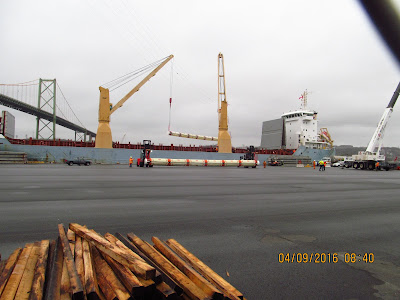 Replacement pipe was handled one pipe at a time onto pier 9C.
They are certainly right that it will be expensive, but that is no excuse. They should leave nothing behind period. The Canada - Nova Scotia Offshore Petroleum Board must not let them off the hook so easily. 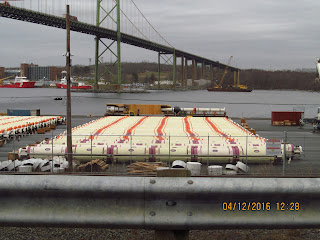 A small portion of the pipe sections, fully jacketed with flotation collars, that were required to replace the dropped pipe.
A comparable number now sit on the ocean bottom, and may be left there, complete with their plastic collars, to rot and decay.

As we know steel may eventually rust away even in low oxygen conditions. However the thousands of flotation collars are plastic. These will gradually break up and float away in small beads. These are known to be consumed by fish and birds or to remain as pollution for decades if not longer.

It seems to me that under a drilling permit the license holder should be totally responsible for any and all clean up costs associated with their work  no matter how complicated, dangerous, difficult, costly (or whatever adjective they can find) the work may be.