As Garrison Keillor used to say every week on the Prairie Home Companion (NPR Radio in the USA)- It was a quiet week in Lake Wobegon.
Halifax harbour somewhat resembled Lake Wobegon this past week. There was the usual traffic of regular callers, but nothing too much to catch the eye. Some different tugs (see Tugfax) but that was about it.
In cases such as this it is time to dip into the shoebox for some older things. I have pretty much played out 1986, so skipping ahead a decade, here are some choice images from 1996. 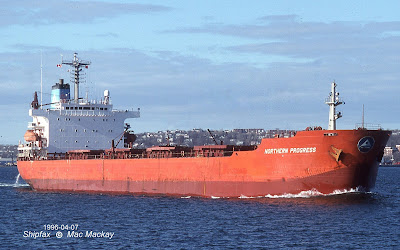 Among the regular winter and spring callers were the ships of Alcan Aluminum (now Rio-TintoAlcan). These were ice class ships, that ran year round to Port Alfred (now La Baie). They made frequent stops in Halifax for ice advisers and bunkers to and from their loading ports in Jamaica or Brazil.
Northern Progress was purpose and built in 1989 by Nippon Kokan KK in Tsu, along with sister Northern Venture and  measured 21,69 grt, 36,445 dwt. They sailed under the Bermuda flag until January 2002 when both were drydocked and renamed in Halifax upon sale to Fednav. They became Federal Progress and Federal Venture under the Hong Kong flag and continued in the alumina trade, but no longer exclusive to Alcan. They extended their range to Camsar, Guinea.
In March 2013 the pair were sold to Greek owners and renamed Progress and Adventure in Montreal.
They did not last long under those names. In July 2014 Progress arrived in Gadani Beach and was broken up starting July 26. Adventure followed and was broken up starting September 3.

IslandBreeze started out life in 1961at the John Brown + Co shipyard in Clydebank as RMS (Royal Mail Ship) Transvaal Castle for the Union-Castle Line. One of the last of world's truly great liners, it operated at 22.5 knots powered by steam turbines delivering 44,000 shp to twin screws. It was also one class, operating more like a hotel, the only (passenger) ship in the fleet that did not have first class accommodation.

It became S.A.Vaal in 1966 under Safmarine ownership, but continued running from Southampton to Durban via Capetown until September 1977 when it was the last of the line to follow that route, sailing from Southampton, returning October 10.  Passenger ships like her were hit by increasing air travel for passengers and mail, but also the loss of cargo to containers. Her 11 1/2 day run to South Africa was no match for a 12 hour plane ride.

Carnival Cruises bought the ship, renamd it Festivale and carried out a reconfiguration at Kawaski HI that nearly doubled passenger capacity from 728 to 1432, by fitting decks in the cargo holds and adding superstructure. Fortunately these did not utterly spoil the ship's handsome profile.

As new ships were brought in Carnival sold it off to Dolphin Cruise Line in 1996. Renamed IslandBreeze [one word, but with a capital B in the middle] it was chartered to Thomson Cruises and called in Halifax twenty times (one more was cancelled due to weather) in 1996 only, including the infamous Titanic cruise. On that occasion scores of Titanic buffs and three actual survivors (one at age 102) observed the recovery of a 10 tonne hunk of hull plate by flotation bagfrom the recently located wreck.

The ship was sold again in 1998, this time to Premier Cruise Line and renamed The Big Red Boat III . After suffering that indignity for two years, Premier went broke and the ship was laid up until 2003. It was finally renamed The Big Boat for the trip to the scrappers, arriving Alang, India July 9, 2003. Nanticoke self-unloads a grain cargo at pier 25. Ships from the lakes usually work all night to discharge.

Built in 1980 by Collingwood Shipyard, the ship was one of  the new breed of Lakers that could also go to sea. It was originally to be called Gleneagles, after a previous CSLer, but became Nanticoke to recognize the port on Lake Erie that was, at the time, a major destination for coal and iron ore.
The ship often called in Halifax with grain and loaded gypsum for the return trip to the Great Lakes.  As a self-unloader, it discharged directly into a hopper and its cargo was transferred by conveyor to the grain elevator.

In May 1997  it was one of the three CSLers converted in Dartmouth to carry magnetite for ballasting the Hibernia gravity base off Newfoundland.

In March 209 it was renamed Salarium when it took up a long term charter to carry salt from the les Mines Salines in the Magdalen Islands. It is still doing that work, but is probably soon due for replacement. 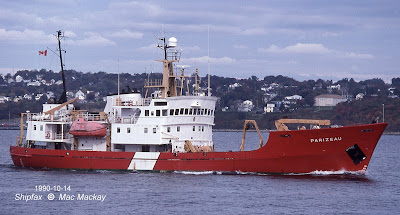 CCGS Parizeau looks quite smart as it sails out on another research trip.

The ship's red paint was barely dry, having been applied in September 1996, covering its previously white hull. The s 1328 grt survey ship was built in 1967 by Burrard Dry Dock in North Vancouver and transferred to the east coast in 1992. It was laid up in 2000 at BIO, renamed 2001-04 and eventually posted for sale.

In late 2003 it was sold, but it was not until 2005 that the new name Destiny Empress was scrawled on its hull. It remained under Canadian registry and sailed for Shelburne and then headed south, only to return after engine trouble near Bermuda. It eventually made its way south again and was resold perhaps more than once.

On December 22, 2009 it was seized off the Spanish coast carrying a tonne of cocaine and its crew of seven (including one Canadian) were arrested, along with 16 people on shore. The ship was sold for scrap and arrived in Aliaga, Turkey July 19, 2011.

So many ex Canadian government ships have been implicated in drug smuggling, one wonders how the government can justify the paltry returns it gets from surplus sales. Many of the ships were fit only for scrap anyway, so there was really no need to go to all the trouble of selling them. 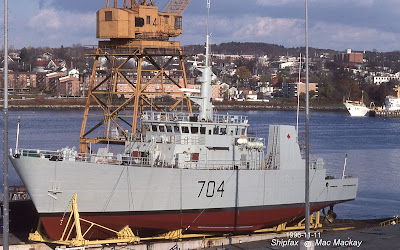 Halifax Shipyard was busy cranking out coastal defence vessels in 1996. Shawinigan was preparing to launch in November.

The major shipbuilding program by Irving Shipbuilding Inc delivered 12 ships over the span of three years. All were stern launched in the traditional manner, with only one launching ship itself ahead of time!  The MCMDVs continue to serve the RCN, in a variety of roles. HMCS Kingston has just returned from the Caribbean from drug patrol work.
In the background of the photo is HMCS Endeavour AGOR 171. The survey ship was transferred to Halifax in 1995, and was finally decommissioned in 1999 (after being decommissioned for a time in 1998 and 1999). It left Halifax in October 2001, classed as a yacht. It was last seen in Green Cove Springs, Florida in 2002 where a planned luxury yacht conversion had stalled. 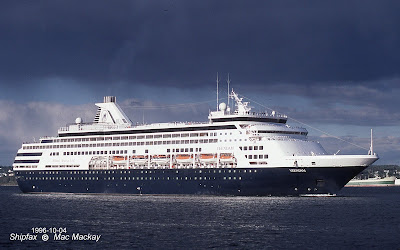 Veendam sails under a glowering sky. The black clouds overhead compliment the ship's black hull. In the background the tanker Irving Eskimo unloads at Irving Oil's Woodside terminal, which after many years of inactivity, has been re-opened in 2016.

Veendam was brand new in 1996, delivered by the Fincanitieri yard in Venice, and is still sailing, although much modified. Two passenger decks were added in the stern during a 2009 refit. It had another refit in 2012, but had serious engine problems in 2014 and was forced to cancel cruises for a three week drydocking.
For several years it was paired with twin sister ship Maasdam as regular Halifax callers. This year Maasdam was replaced by Rotterdam, but Veendam made twenty during the 2016 cruise season, including the inaugural cruise ship call April 30 . 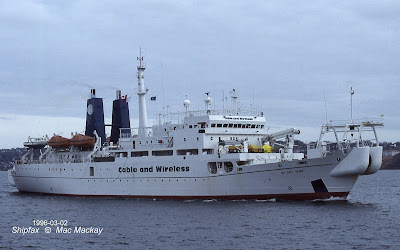 The ship was named for the Chairman and Chief Executive of Cable + Wireless plc from 1980 to 1990, Sir Eric Sharp, later Eric Sharp, Baron of Grimsdyke (b.1916-d.1994). He oversaw the re-privatization of the company which had been nationalized in 1947 and placed under the control of the (British) Post Office. The ship was built in 1989 by Swan Hunter, Wallsend, a company with several Halifax connections, most notably as builder CSS Acadia, the flag ship of the Maritime Museum of the Atlantic.

Cable and Wireless reconfigured itself many times over after 1990, but the ship was acquired in 2005 by IT International Telecom, the Canadian communications operator. Renamed IT Intrepid and placed under Barbados flag, it continues to carry out cable work, primarily in eastern North America, often working from Halifax.

I pictured it in this blog on October 6 when it arrived for a refit at pier 9. With that work nearly done, the ship is due to sail this week to repair a cable break on the St.Lawrence River between Pointe-à-Santerre and Forestville. 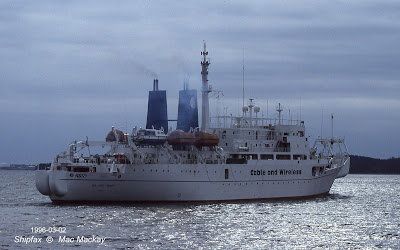 Aside from the twin stacks, it is very much in the traditional style of cable ships