There has been a big rush over the past few days to clear cargo before the Christmas holiday. Both container terminals have been very busy, but Halterm cleared its last customer this morning when CMA CGM Altaviva sailed at daybreak. Oceanex Sanderling sailed from Autoport this morning too.  The bulk carrier Eider arrived and sailed over night from pier 28 where it took a quick top off load of grain en route from the Great Lakes.

The action then shifted farther north. 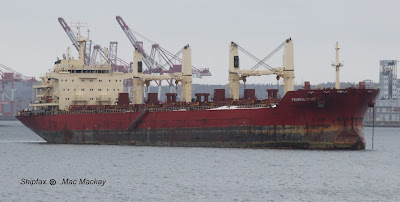 Federal Swift comes to anchor against a backdrop of idle cranes at Halterm.

The bulk carrier Federal Swift arrived from Baie-Comeau for bunkers and anchored in the lower harbour. The ship was built in 2012 by Zhejiang Ouhua Shipbuilding Co in Zhonshan, China. A ship of 24,196 grt, 37,140 dwt, it is in ballast likely having delivered bauxite or alumina to Baie-Comeau. The ship carries four 30 tonne cranes and grab buckets to handle such cargoes.

Fairview Cove was also busy over the last few days. Agios Minas cleared over night and Tokyo Express arrived, but I must have put the curse on Atlantic Sea, because it was forced out to anchor early last evening with mechanical issues. It was joined later by NYK Rumina which will be anchored until December 26 before it moves in to Fairview Cove.

A regular caller for the G6 Alliance NYK Rumina will be anchored for a couple of days.

A late morning arrival, Fritz Reuter went directly to anchor in Bedford Basin where it will remain until December 27 before moving to Halterm.

This is the ship's 25th voyage for Melfi Marine, trading between Europe and Cuba. The 18,840 grt, 23,732 dwt ship has a capacity of 1732 TEU (including 379 reefers) and carries a pair of 45 tonne cranes  for ports without container cranes. Its first visit to Halifax was December 8, 2013.
Guangzhou Wenchong Shipyard Co Ltd produced the ship as Maruba Zonda in 2006, but it was renamed on delivery to Norddeutsche Reederei Schulte of Hamburg.

It was followed by the supplier Skandi Flora for pier 9C. It will not be needed over Christmas while the drill ship Stena IceMAX suspends drilling for maintenance. 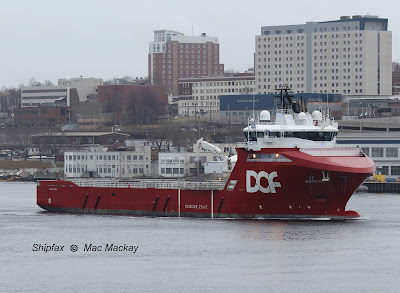 Skandi Flora was built in 2009 by STX Norway Offshore AS in Trondheim for DOF Rederi AS of Storebo, Norway. It is operated for DOF Subsea Canada Corp by Mathers Logistics of Halifax under a coasting license as a non-duty paid Canadian flag vessel and was registered in Halifax September 3, 2015.
The 4469 grt, 5005 dwt ship will be finishing up its work soon as Shell has announced they will stop drilling in the Shelburne Basin on completion of the current well.


Once the two inbounds were safely out of the way, Tokyo Express was able to move through the Narrows for sea. 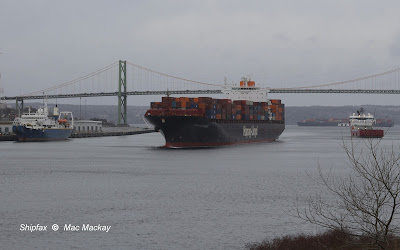 Tokyo Express eases by pier 9A where IT Intrepid is lingering for the finishing touches to a refit. It should be sailing for a cable repair job on the St.Lawrence River after re-fueling next week.

HAPAG-Lloyd's Tokyo Express came out of the Hyundai Heavy shipyard in Ulsan in 2000. At 54,465 grt, 67,145 dwt, with a capacity of 4890 TEU (including 370 reefers) it is among that endangered species of (formerly) Panamax ships that are no longer considered efficient carriers. Ships of its size are going to scrap
at a record rate as the industry tries to shed itself of unprofitable tonnage.

Atlantic Sea followed on its heals. 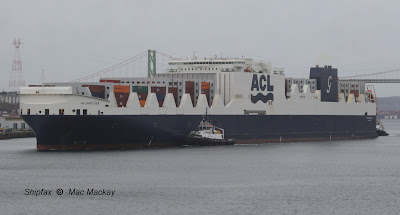 ACL's third (of five) new G4 class ships, Atlantic Sea was delivered in the summer of 2016. The Shanghai built ships have all been experiencing teething problems as new-builds are wont to do, but this one had been more or less trouble free. However it was restricted to port by Transport Canada from yesterday until late this morning due to some mechanical problem. It was allowed to sail, even though it is missing its starboard anchor. It may not be that easy to find an anchor for a 100,430 grt, 56,700 dwt ship on short notice, and ships usually don't carry spares.

The loss of an anchor is usually the result of defective chain. It can be a serious matter when a chain fails, and that is why chain manufacturing is such a highly specialised process. See this video:  https://www.youtube.com/watch?v=lY2JqGTvPh8