Dimitrios K. - ship with a history

The general cargo ship Dimitrios K. is due for bunkers December 1. The ship has been here before and made the news early in its career.
The Wuhu Shipyard in Wuhu, China built the ship in 2001 as the Cedar for Sabine Trading (Diana Shipping Agencies, managers) of Greece. The 16,360 grt ship had a deadweight tonnage of 24,765 and was classed as a general cargo ship, equipped with four cranes and grab buckets for bulk cargoes.
On November 16, 2001 it had a steering failure on the St.Lawrence River and strayed 200 feet out of the channel and grounded on a rocky bottom near Deschaillons. Although freed the next day it was sent back to Quebec City for inspection. It was found to have been holed in two places, but was allowed to proceed to Thorold, ON to unload its cargo of bauxite and alumina and return to Quebec City for repairs.


In 2003 it was sold and renamed Atlantic Castle under the Antigua and Barbuda flag and little was heard of it until it was sold again in 2007 and renamed Ladytramp. The new owners were associated with Korkyra Shipping Ltd of Korcula, Croatia, and the ship was flagged in the Marshall Islands. Its gross tonnage was revised to 16,807. 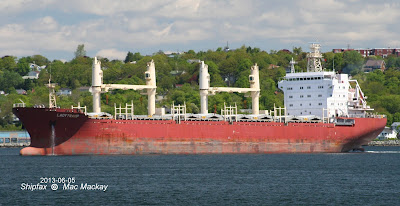 On June 4, 2013 it arrived in Halifax in ballast for bunkers and made a most unladylike departure a few hours later under a pall of heavy smoke. 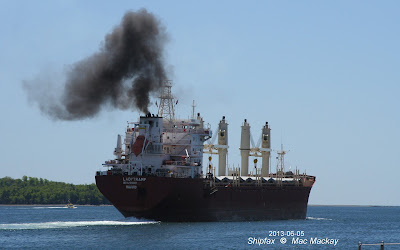 On arrival in Baie-Comeau On June 8 it was detained by Transport Canada until June 10 for a defective emergency fire pump and piping.

Later that year it was sold again to current owners, Kallianis Brothers of Athens, Greece, but remains under the Marshall Islands flag. I last saw the ship in Point Tupper November 11, 2014,  where it was unloading cargo using its grabs. 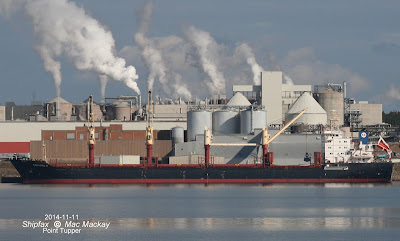 On it latest visit to Halifax it is giving Baie-Comeau as its last port of call on November 29, but may have stopped off Sydney, NS on November 30. It is a little early in the season for an ice advisor, but it may have had a pilot to disembark.


The ship appears to be loaded, which would mean a cargo of grain from the Cargill elevator in Baie-Comeau. 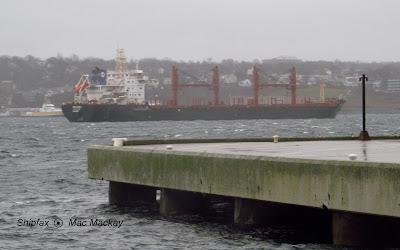 At anchor in the harbor off Purdy's wharf, the research vessel Coriolus II can be seen tied up at the old Coast Guard base in Dartmouth, the site of a new ocean research facility.

Unlike the pleasant weather of the previous photos, today's very high winds will likely delay bunkering for some time.