One of the lines in the Christmas song In the Bleak Midwinter says that "frosty winds make moan". There was no frost but a fair amount of moaning today as high winds wreaked havoc on transportation generally with the usual Fundy and Newfoundland ferry cancellations, bridge and causeway restrictions against high sided vehicles and numerous shipping delays and incidents. 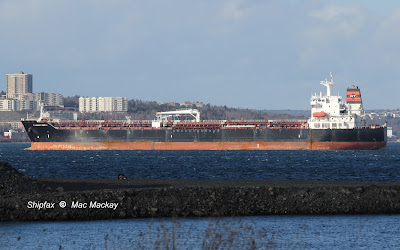 In Halifax the tanker Ridgebury Cindy A began to drag anchor in Bedford Basin and a pilot was called to re-secure the ship. And at pier 42 Halterm, the container ship ZIM Virginia also called for tugs and pilot, likely due to parting lines. It kept the tugs Atlantic Oak and Atlantic Willow alongside all day. 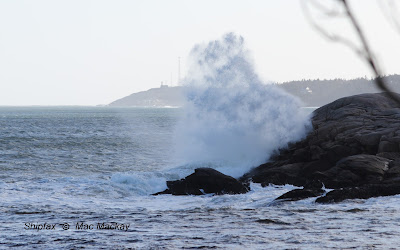 Surf crashes the onshore at Herring Cove, with Chebucto Head in the background.

Several arrivals were also been delayed due to unfavourable conditions at the pilot station and farther afield. NYK Deneb, CSL Tacoma and Bruarfoss all postponed arrivals in Halifax until later in the day. They had been scheduled for early this morning but those ETAs were adjusted yesterday in view of the forecast. They finally made it in starting at 1530. 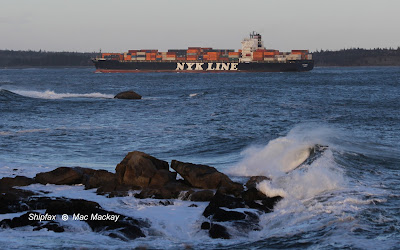 CSL Tacoma was in ballast but didn't seem to be rolling too much. 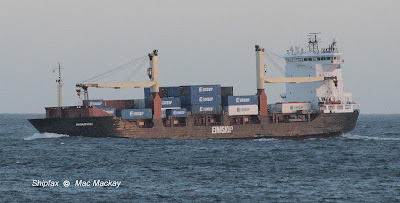 Bruarfoss was pitching more than rolling

All ships are trying to get in and out before the New Year's Day holiday, so they are squeezing up against deadlines with these delays (hence the moaning).

The only departure was the supplier Venture Sea. 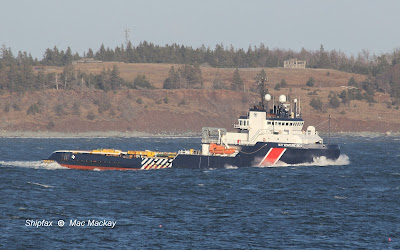 There were some fair swells off Macnab's Island - but probably much larger at sea.

Farther afield the bulk carrier Atlantic Huron took shelter well into St.George's Bay, at the western entrance to the Strait of Canso, far off its intended course for Halifax. Had the Canso Canal been open, the ship would likely have transited yesterday afternoon. However the Canal has been closed since November 1 and will not re-open until mid-May to allow for bridge repairs. That meant that Atlantic Huron will have to go around Cape North to reach Halifax. With winds in that area predicted to exceed 170 kph, the ship sailed down the west coast of Cape Breton instead and sought shelter in the lee of the land. It will mean at least two days extra sailing time once the winds abate. Former fleetmate Atlantic Erie (renamed Spirit of Shpongle) also took shelter near the same area last month while in tow of the tug Pacific Hickory for the trip to the breakers in Turkey. 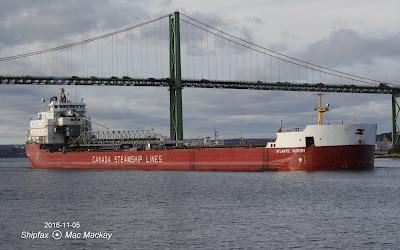 Fortunately the frost in Christina Rossetti's words is not present. In fact some of the warmest temperatures in Canada accompanied the winds, with +7 to +9 degrees C common in many areas. 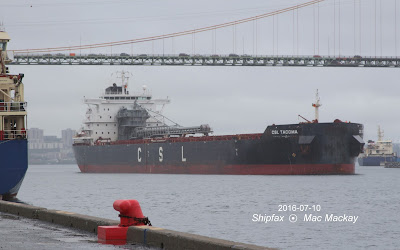 Both CSL ships Atlantic Huron and CSL Tacoma will be loading gypsum in Halifax, but another one of their fleet mates, once a frequent caller, will not be back in Halifax.


CSL Atlas was sold recently and is heading for the breakers in Bangladesh under the name of Anita.
Under the current economic conditions, with widespread scrappings in the container and bulk carrier market, ship owners are favouring India for container ships, but Pakistan and Bangladesh are getting the bulk carriers. India's move toward responsible practices is attracting many ships, particularly from German and EU owners. Pakistan's appalling safety record, particularly after recent tanker fires and huge loss of life, has seen only a short-lived drop in business, due in part to the desperate need to scrap ships.


CSL Atlas , built in 1990 with a deadweight capacity of 67,634 dwt and 41,173 grt, was too large to take complete loads at National Gypsum in Halifax, but it was a frequent caller at Auld's Cove where it loaded stone for the US market. Nevertheless it made many trips from Halifax as backhauls after unloading coal in Cape Breton. Its last call in Halifax was June 11, 2016.

CSL Atlas in January 2016 was looking quite seedy when it anchored in Bedford Basin. The writing must have been on the wall even then.

When built in 1990 in Brazil it was the only panamax self-unloader in the world. Its holds were lined with Teflon and it had a revolutionary boom, with the outward 100 ft slewing on a pivot from the inner boom which swung from its own pivot. This arrangement allowed it much greater flexibility in unloading.


Interestingly the ship's last port of call was Iskenderun, Turkey. Apparently scrap prices at Chittagong were higher than Turkish prices, warranting the trip all the way to Bangladesh. The ship is now mid-way down the west coast of India, in the Arabian Sea.