Caribbean Princess - her name is mud

The cruise ship Caribbean Princess, a familiar caller in Halifax, has just made history by receiving the largest environmental fine ever levied on a ship in the United States. The $40 million fine is certainly in proportion to the offence which including pumping oily waste overboard through a series of illegal "magic pipes", falsifying records and covering up the offence which took place over several years.

It was discovered in England in August 2013 by a new ship's engineer. He blew the whistle on the other engineers and when the ship arrived in the US the Coast Guard went aboard and discovered where the magic pipe had been. Some crew had been busy trying to remove the evidence, but traces were left.

Not only must the ship's owner (ultimately Carnival Corp) pay the fine, but its eight subsidiaries, AIDA, Carnival, Costa, Cunard, Holland America, P+O, Princess and Seabourn are now under a court supervised Environmental Compliance Program for five years. Good. 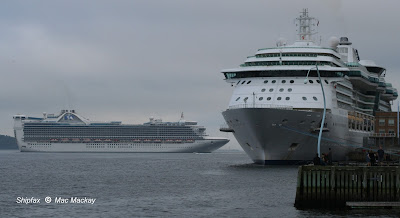 Known by some as "the Shopping Cart" due to her odd observation deck above the stern, Caribbean Princess is seen here leaving Halifax under a cloud September 19, 2015.

Caribbean Princess was in Halifax September 27, October 7, 17 and 27 this year, and several times a year in previous years, since its first call in 2008. How many of those times was it discharging waste overboard in Canadian waters - apparently undetected.

In the case of egregious offences such as this the US courts have been known to ban ships from US waters. I think Carnival got off lightly.

One has to wonder what the crew's motivation was in pumping the waste over. In some rust bucket ships with sleazy owners, it is easier to understand - they want to save the cost of disposing of waste and to cover up sloppy practises. But in a supposedly well managed operation like a cruise line, unless management was complicit - and there has been no such suggestion - it must have been entirely motivated by the crew. What were they do gain? Covering up their own poor management? Trying to live within a budget?  Even some sort of kickbacks from shore side organizations? There doesn't seem to be any explanation that of why the crew did what they did.