Transport Desgagnés Inc of Quebec has been on a major buying spree this year, acquiring cargo ships and taking delivery of a new tanker *- the first of several new builds.

Today the latest cargo acquisition arrived in Halifax for reflagging. Argentia Desgagnés, built in 2007 by Ustaoglu Yat KO of Eregli, Turkey is the former Turkish flag Ofmar. A general cargo / bulker of 6369 grt, 8950 dwt, it is fitted with two cranes and clamshell grabs and will replace the veteran Amélia Desgagnés.

The new ship was reflagged as of today and its port of registry is now St.John's, NL.  It was registered in Barbados for the delivery trip from Tuzla, Turkey, where it received a new paint job, including the distinctive Desgagnés yellow stripe. 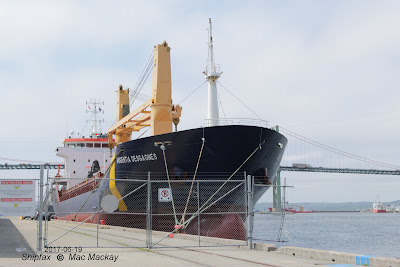 The new port of registry is unusual for Desgagnés, but since the ship will be running mostly in eastern Canada (as its new name suggests) it does make sense.

Its predecessor, Amélia Desgagnées was familiar sight in the Atlantic Canada for many years. Built by Collingwood Shipyards in 1976 as Soodoc for N.M.Paterson, its modest size of 4490 grt, 7250 dwt allowed it access to many smaller ports. However it also called in Halifax with grain.  Soon after it was built it was fitted with four 10 ton cranes in pairs, allowing it to handle a variety of bulk cargoes such as salt. Transport Desgagnés acquired and renamed the ship in 1990. 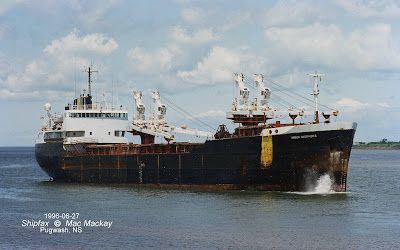 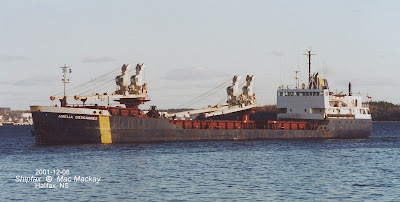 Amélia Desgagnés arriving in Halifax with a small cargo of grain.
_ _ _

* The company's newest tanker, Damia Desgagnés, ran into a spot of trouble Friday last week when it had a mechanical problem and ran aground at Mariatown, ON, near Iroquois, on the St.Lawrence Seaway. Traffic in the busy waterway was held up for a day until the ship was freed Saturday by two tugs. It was escorted to Johnstown, ON for survey. The new dual fuel ship was on its first trip up the Seaway bound for Nanticoke, ON,  with a cargo of heavy fuel.
There has been no report yet on the extent of damage.
.