The lovely Esmerelda returned to Halifax after a long absence and anchored in the harbour for all to see. (She will move in to pier 20 on Friday after some cruise ships get out of the way). 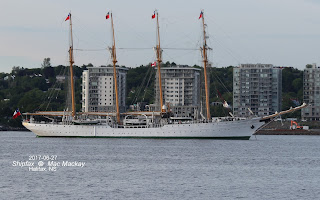 Perhaps she does not have the cachet of a full rigged ship or a barque, but this is made up for to some extent by her fine lines. Built originally as a four masted topsail schooner - that is how I first saw her in Quebec City in 1963. 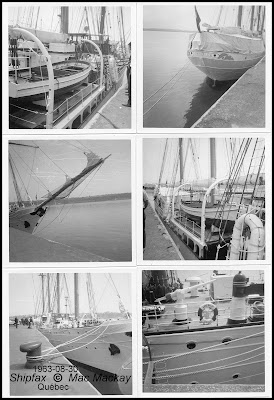 My first "tall ship' - although the term was not in use in 1963 except in poetry.

Aside from a change in rig, she is much the same, except for the addition of some SatNav domes.
She is now considered to be a four masted barquentine, after her fore gaffsail was removed and replaced by staysails. Wikipedia says the change was made in the 1970s, but she was not rigged with a fore gaffsail in 1963, so the change may have been made well before that.

Near sister ship, the Spanish Juan Sebastian Elcano still carries that gaff foresail sail (including gaff and boom) despite the same type of navigating bridge.