The Italian naval training vessel Amerigo Vespucci is a full rigged ship, purpose built in 1930, but borrowing from a design of a previous century. 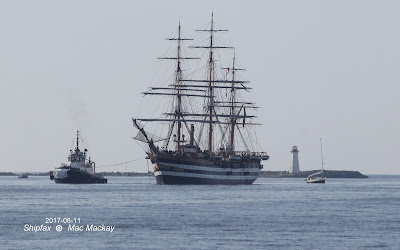 The long tradition of training naval officers in sail is well upheld by Italy. For berthing at pier 20, the tug Atlantic Willow draped white canvas over its bow to protect the ship's paint scheme from unsightly black smudges. The ship will be open to the public Monday and Tuesday and will sail Wednesday morning.


State of Maine
The Maine Maritime Academy based in Castine*, Maine has a very different purpose in mind when it trains merchant marine officers on its ship State of Maine. 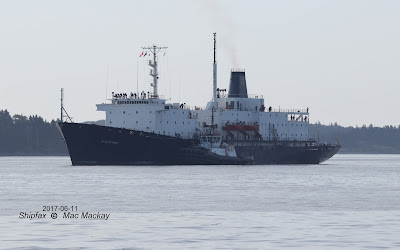 The ship is used to replicate conditions that officers will experience on US flag merchant ships. Sail is not in the cards. 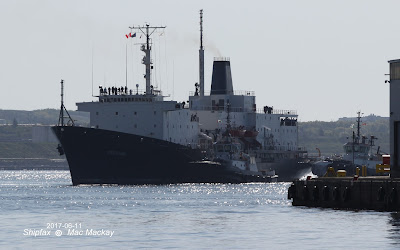 A number of the ship's complement are stationed on monkey island to observe proceedings as the ship is nudged into pier 23.

Built in 1990 by Bethlehem Steel, Sparrows Point, as USNS Tanner (T-AGS-40) it was a fast oceanographic vessel for the US Navy. However in 1993 a catastrophic fire destroyed its main engines. The ship was removed from service and eventually handed over the the US Maritime Administration (MARAD). It was rebuilt with a less powerful MaK main engine of 8,046 bhp giving a speed of 16 knots. (The orginal engines delivered 17,000 hp for 20 knots). Accommodation was also increased from 108 to 302 and reconfigured.

On a previous visit to Halifax in 1997 the ship still had a navy grey superstructure.

This is the fourth ship of the name for the Maine Maritime Academy.
The previous one, State of Maine (iii) also made a call in Halifax back in 1988. It was the former USNS Upshur (T-AP-18) . Completed in 1951 as the cargo/passenger President Hayes by New York Shipbuilding Co in Camden, NJ, for American President Lines, it was requisitioned by the USN during the Korean War for use as a troop ship. It served until 1973 when it was assigned to the Maine Maritime Academy. 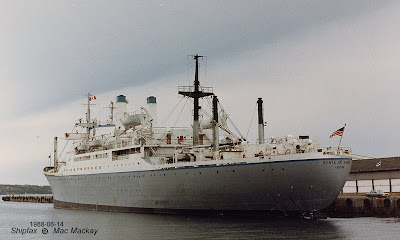 State of Maine (iii) shows off its fine lines at pier 30.

In 1995 it was transferred to the US Coast Guard and positioned in Mobile, AB to test firefighting technology. It was damaged by hurricanes Katrina in 2005 and Ike in 2008 but remains in Mobile.

* Castine, Maine and Halifax share an interesting history. Castine, at the mouth of the Penobscot River was much fought over by English, French, Dutch and Americans from its founding in 1613 as a French outpost. However during the war of 1812-14, it was seized by the British and held for the next three years. When it was surrendered to the Americans in 1815 under the Treaty of Ghent, the British kept the 10,750  pounds sterling they had collected as customs duties and used the money to found Dalhousie University in Halifax.