The chemical tanker Golden Oak arrived this afternoon with no designated berth. Usually that means the ship will anchor at the pilot's discretion. That certainly proved to be true, as the first attempt to anchor in number 1 anchorage was scrubbed and the ship made its way to number 7 anchorage where it finally got its hook to grab. In fact the ship was conducting a compass swing in number one anchorage - the launch Captain Jim was there to deliver and pick up the compass adjuster. 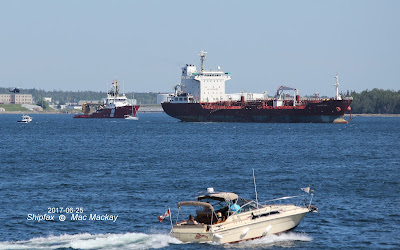 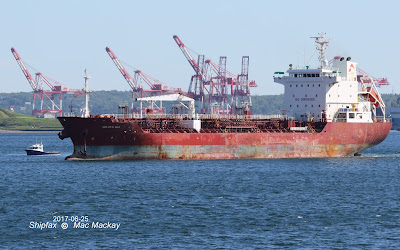 The launch Captain Jim and the pilot boat Chebucto Pilot stood by during this exercise which took close to two hours.

Golden Oak, built in 2008 by Jinse, Busan, with a gross tonnage of 8,505 and deadweight of 13,168 dwt it is of mid-size for this type of ship. Owned by the anonymous OCM Tuna Golden Oak LLC, c/o Norbulk Shipping of Glasgow, Scotland, and registered in the Marshal Islands, it is perhaps surprisingly managed  by Algoma Tankers. Algoma's six ship domestic Canadian tanker fleet is well known, but its presence in the international tanker market has not been publicized. Algoma only took over management on June 15.Amendment: THE SHIP WAS ALSO REGISTERED IN CANADA ON JUNE 15, WITH HALIFAX AS ITS PORT OF REGISTRY. THE SHIP IS ON SIX MONTH CHARTER TO ALGOMA TANKERS.

Algoma Tankers have been granted coasting licenses for four (unnamed) foreign flag tankers to operate on the Great Lakes and in eastern Canada over the summer months due to an Imperial oil refinery hut down.