The Hong Kong flag tanker Atlantic Pegasus arrived this afternoon and tied up at the Irving Oil depot in Woodside. The ship arrived from Saint John, having previously delivered some refined petroleum product to that port from Amsterdam. As previously noted Irving Oil is importing large quantities of European product. 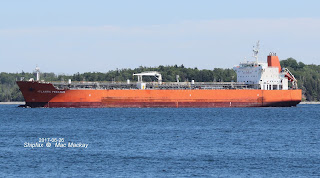 Atlantic Pegasus is another in the long line of similar ships built by Hyundai Mipo in Ulsan. Its tonnages are 29,107 grt, 46,838 dwt. It appears to be owned by the single ship company Heroic Lupus Inc. The ship is managed by PTMC (Product Tankers Management Co) an operating pool formed in 2014 by Asahi Tanker from Japan, Ultratank, a Chilean company , Overseas Shipholding Group (OSG) of the United Sates  and Mitsui OSK Lines (MOL) of Japan, with a fleet of about 60 ships.