The notoriously wet month of June lived up to its reputation today, delivering a variety of precipitations, especially when ships were moving.

This morning I had hope for a good photo of the 8456 TEU CMA CGM Titus on its fourth visit to Halifax. I had missed its first visit 2015-10-04 and all subsequent visits for various reasons. As the tugs vanished into the fog inside Meagher's Beach I could hear the ship's booming fog signal, but it was not until the ship was well up to the Middle Ground that it was anything like visible. 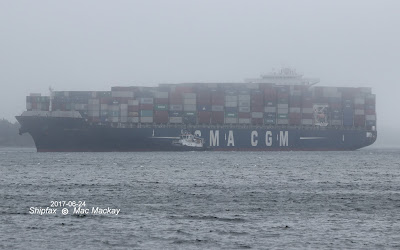 With tugs alongside (one to port and one to starboard) the ship was about to make its turn and was still sounding its fog signal.

CMA CGM is bringing larger ships along all the time, so it was important to get a photo of this ship, which is one of the smaller types that may be replaced. The 90,931 grt, 109,021 dwt ship dates from 2011 when it was built by Samsung Shipbuilding and Heavy Industries Co Ltd.

Later in the day the fog had moved off somewhat in the upper reaches of the harbour, but the on again / off again showers were on again for the sailing of K-Line's George Washington Bridge. The Panama flag ship was built In 2006 by Hyundai Heavy Industry in Ulsan and carries 5624 TEU, including 600 reefers on 68,750 grt, 74,023 dwt. 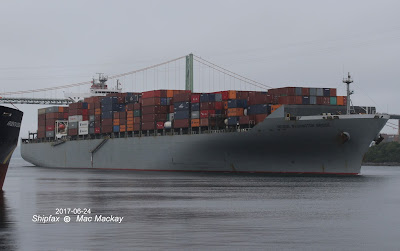 Bridge and bridge - the ship has just passed the A. Murray MacKay bridge outbound.

K-Line's plans to merge its container operations into a joint venture called the Ocean Network Express (ONE) with the other Japanese lines MOL and NYK has run into trouble with the Competition Commission of South Africa. That body is of the opinion that it could lead to collusion on rates. The same lines had previously been found to collude on auto carrier rates, and South Africa therefore will not approve the merger. Where this leaves the plan is in is question. Oddly United States, the Federal Maritime Commission stated that they did not have jurisdiction in the matter since it was not a merger but an acquisition.