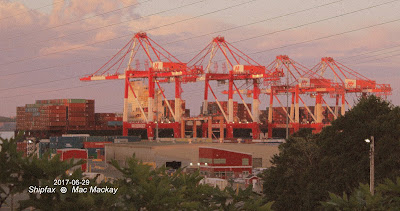 Zim Antwerp was built by Hyundai Samho in South Korea in 2009, initially for Zim, but in 2011 was sold to NSC Shipping GmbH + Cie KG and chartered back, under the Liberian flag. It is the way of the future, but at the low end of the very large ships calling at east coast North American ports. Ships in the 13,000 TEU range are now visiting US ports, and 20,000 TEU ships are now being delivered from the shipyards for the Asia-Europe run, displacing the 10,000 to 15,000 ships to North America. 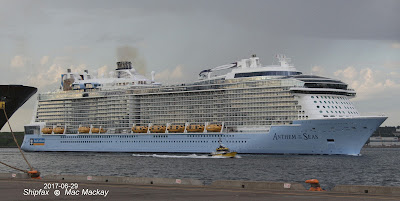 Also in port was the 4,180 passenger capacity Anthem of the Seas. It is the largest passenger vessel (by capacity) scheduled to call in Halifax this year. Its gross tonnage is 168,666 gross tons (a measurement of cubic space contained within the ship, 100 cu ft = 1 gross ton). It was built in 2015 by MeyerWerft, Papenburg and last year had some bad luck with weather missing a Halifax port call early in the season.

A less significant ship perhaps, anchored for bunkers today. The oddly named Desert Osprey is a Marshal Islands bulk carrier, built in 2015 by Mitsui, Chiba, and operated by Atlantic Bulk Carriers. The 31,848 grt, 55,837 dwt ship is bound from Vila do Conde, Brazil a bauxite and alumina port, and is bound for a Quebec smelter, likely in La Baie (for Arvida) Baie Comeau. 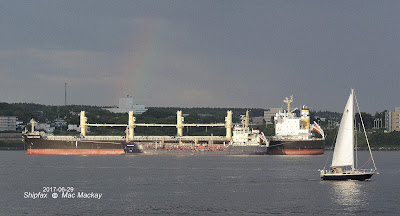 It may be a lucky ship however, as a rainbow began to form over number 2 hatch.