What's in a name

I am always interested in a ship's name - particularly if it is out of the ordinary. Certainly this afternoon's arrival for Autoport would fit into that category. 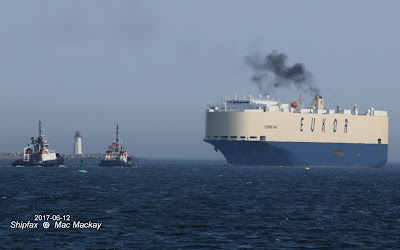 Morning Ninni is an otherwise typical autocarrier of 51,917 grt, 17,372 dwt., with a capacity of 5,340 cars. Built in 2008 by Tsuneishi in Tadotsu, Japan, it is operated by Eukor (EUrope KOrea). Eukor, based in Hamburg, was set up to carry Hyundai and Kia cars but as with most autocarriers, it works world wide carrying autos for all manufacturers. 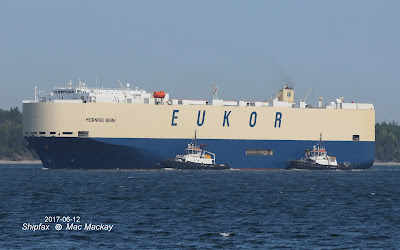 With tugs in place, the ship prepares to make its run into Autoport in Eastern Passage.

There is no great secret to the name "Ninni" - it is a woman's given name [pronounced Nee-Nee]. It is not to be confused with Ninny (a female donkey, but used unflatteringly to describe someone whose mental faculties may be scrambled.)