The Americans are here

The United States Navy arrived in force today, and there was also a representative of the United Sates merchant marine.

The USS Dwight D. Eisenhower Strike Group, lead by the aircraft carrier of the same name are making a weekend visit, resulting a minor invasion of several thousand sailors to join the many other who will be celebrating the 150th anniversary of Canada's constitution. 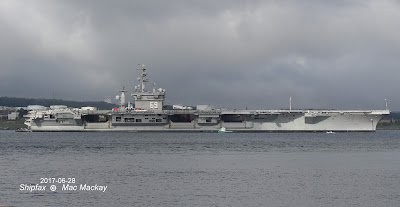 USS Dwight D. Eisenhower CVN 69 is a Nimitz class nuclear aircraft carrier. At 1092 ft in length it is too large to tie up conveniently at any Halifax piers (its flight deck would overhang or contact the pier side structures at most berths) but concerns about its nuclear power plant preclude berthing anyway. Therefore it has taken up position in number one anchorage. A fleet of support craft have been engaged to ferry liberty persons ashore and deal with the inevitable waste products. 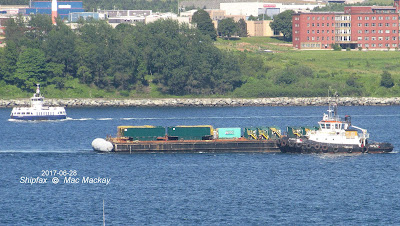 The Atlantic Oak - working in reverse- shuttles the pontoon Irving Beaver out to number one anchorage, carrying waste containers. (See Tugfax for more on the pontoon). 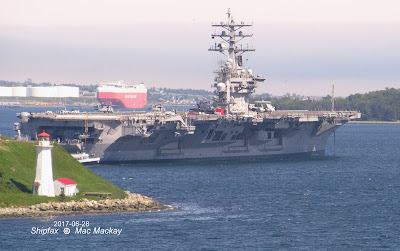 Pressed into service as a shuttle, the tour boat Summer Bay stands off the stern of the aircraft carrier and the Liberty unloads cargo at Autoport.

The lone US merchant marine representative is the Liberty a car carrier that arrived at Autoport this morning. Currently the largest car carrier under US flag, irt was built in 2006 by Mitsubishi, Nagasaki as Topeka for Wilhelm Wilhelmsen. It was acquired by Tote Carriers earlier this year and renamed. It will move over to pier 31 tomorrow to unload more cargo.