Two big ships are in port today.
The first arrival was the always impressive Queen Mary 2. I may get a photo when it sails later in the day.


The other big arrival is a relatively rare loaded crude oil tanker. Evridiki built in 2007 by Hyundai Samho is 84,796 grt, 167,294 dwt ship operating under the Liberian flag by the Greek company Liquimar Tankers Management Services Inc of Athens. The ship is assigned to the Blue Fin pool of Suezmax tankers, which provides commercial management of more than 100 tankers of all sizes  under parent company Heidmar. 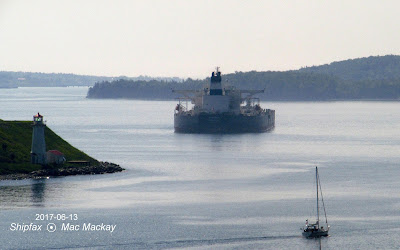 
Its port call will be brief, since it is here for an Asian gypsy moth inspection, and will be sailing as soon as it receives clearance. As with all large loaded crude tankers it was assigned two pilots on arrival and will also take to pilots on departure.


Inland ports, such as Quebec are particularly sensitive to gypsy moth exposure, since the pest can invade the valuable coniferous forests if not caught in the egg stage. The species originates in China, Japan, North and South Korea and the Russian Far East.


The ship loaded in Novorssysk, Russia with crude oil from the Tengiz field in the Caspian Sea and is bound for Quebec City.

Addenda:
1.
I did get a chance for a photo of Queen Mary 2 on her departure, from virtually the same angle as previous photos of the ship - but this time there was a difference: 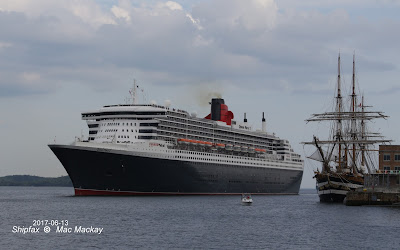 Under a broken sky, Queen Mary 2 gets underway from pier 22 and passes the Italian naval training ship Americgo Vespucci at pier 20.﻿

It was also a cruise with a difference for passengers. While well off Newfoundland, QM2 was tasked with rescuing a single handed sailor, Mervyn Wheatley, after his boat capsized in hurricane conditions. The single-hander was participating in the Ostar race and his was one of five boats damaged by the wind and 15 meter seas. All the sailors were rescued by a variety of ships and a Royal Canadian Air Force helicopter. QM2's rescue boat is credited with superb seamanship in carrying out the rescue in difficult conditions. 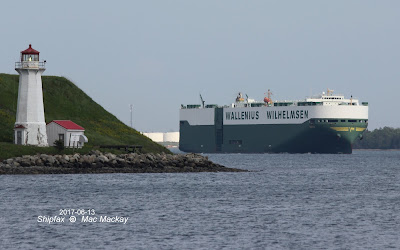 The ship is named for the operatic Bess (from Porgy and Bess) - not after good Queen Bess of England.
Built by Shin Kurushima in Toyohashi, Japan iit is owned by EA Car Carriers Panama SA and operates under long term charter to Wallenius Lines for the Wallenius Wilhelmsen pool.