Nord Taipei for bunkers and Veendam

The general cargo ship Nord Taipei dropped in for few hours to take bunkers. It was due to sail at 0730 hrs but may have been held up for a short time.
Built in 2011 by Kando Zoshensho in Kawajiri, Japan, measuring 21,483 grt, 33,143 dwt, and judging by its ports of call is likely in the bulk trades. It carries four cranes and grab buckets on deck.

The ship's last port is given as Fairless Hills, PA and it is bound for Baie Comeau, QC in ballast. US Steel's famous Fairless Works, 30 miles upstream from Philadelphia on the Delaware River, is now the home of  the Keystone Industrial Port Complex, where the highly polluted former steel and chemical plant site has been redeveloped for other industries. The huge mill was built to process iron ore from the Orinoco River region of Venezuela and named for Benjamin Franklin Fairless president of US Steel, and once employed 7,000 people.

The ship's departure might have been delayed for a few minutes to allow the arrival of Veendam which came in east and north of George's Island to berth at pier 22, bows south. 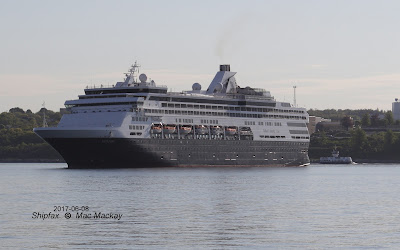 Veendam and sister Maasdam have been regular cruise ship callers for many years.