Big and small - we serve them all

Two ships at opposite ends of the size spectrum called in Halifax today (Sunday).

CMA CGM Elbe
Another of CMA CGMs 9,000+ TEU container ships arrived on the Columbus JAX weekly service from the far east. CMA CGM Elbe dates from 2014 when it was delivered by Dalian Shipbuilding Industry Co, all with a capacity of 9,365 TEU (including 1458 reefers).

CMA CGM Elbe arrives off Halterm in the early morning sun. Imagine a ship with 30% more capacity - they may not be coming to Halifax any time soon.


This is the fifth of the six sisters to cal in Halifax (APL Danube, CMA CGM Loire, CMA CGM Rhone and CMA CGM Tage have already called. CMA CGM Thames has yet to put in an appearance - but it is due next week).

As much larger ships are delivered and take over the Asia, Far East /Europe routes, ships of this size and bigger are being displaced to North American routes. Some 13,500 TEU ships are accessing US east coast ports via the Panama canal. Halifax may be left out in the cold for these larger ships unless its infrastructure is improved - and soon.


Sichem Challenge
There will always be smaller ships on the high seas, designed for specific cargoes. Such ships as chemical tankers, which carry relatively small (and highly concentrated) batches of cargo are usually smaller than the product tankers that deliver refined fuel. 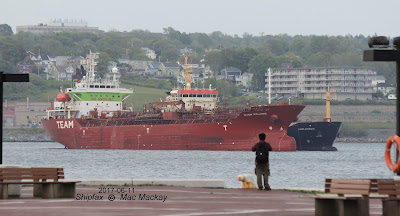 Another shipwatcher gets a closer shot of Sichem Challenge refueling from Algoma Dartmouth.
The ship arrived from Port Alfred (La Baie), QC.


Sichem Challenge measures a modest 7,179 grt, 12,1818 dwt. It was built by Watanbe Zosen in Hakata Japan in 129978 and has carried a variety of names, thanks largely to the mergers of various tanker companies. It was built as Queen of Montreux, and became 97: North Challenge, 06: Songa Challenge and 07: Sichem Challenge. Current owners are Team Tankers Regional Ltd, operators of more than 40 ships part of the Eitzen Chemical empire.