More product tankers and a return

Product tankers of the mid-range size continue to call in Halifax on a random basis - and there seems to be no end to the variety of operating companies. That variety however does not extend much to the ships themselves. Most come from a few shipyards in Korea, with occasional ships from other yards, but still built to much the same pattern.

Sunday's arrival at Imperial Oil berth 3 is among the most typical. Atlantic Crown came from the Hyundai Mipo yard in Ulsan in 2007. Its tonnages are quite typical of MR tankers - 29,266 grt, 47,128 dwt. 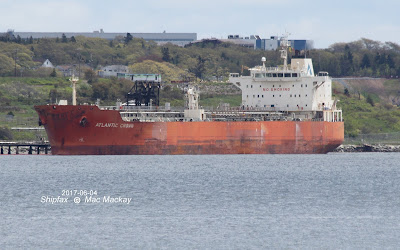 The ship is owned by Heroic Artemis Inc (sounds Greek) and managed by ST Shipping + Transport Pte of Singapore, with the ship registered in Hong Kong.

Today's arrival breaks the mold only slightly. The Malta flag Sea Halcyone is owned by Halcyone Maritime Co Ltd and managed by Sea World Management + Trading Ltd of Greece - part of the Laliotis Group. It's tonnage is typical: 28,553 grt, 47,087 dwt, but it was built, not in Korea, but by Onomichi Zosen, Onomichi Japan in 2001. 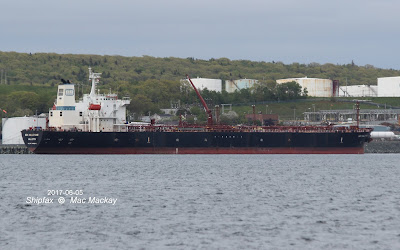 Its original name was Unique Sunshine for Leo Navigation Corp Ltd and had a variety of far east managers until 2013 when it was acquired and renamed by its current owners. As with most foreign flag tankers calling at Irving's Woodside terminal in recent months it arrived from Amsterdam (via the Ijmuiden sea locks).

Returning to port in the last week or so CCGS Earl Grey has resumed normal spring and early summer duties out of Halifax. It had been working in the northern Gulf of St.Lawrence and Strait of Belle Isle assisting ships in late season ice. 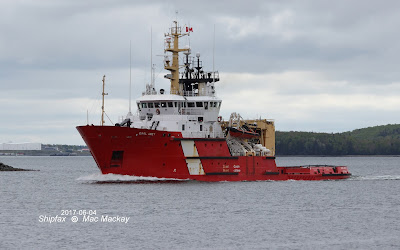 Its most recent trip was a Saturday departure and Sunday return for navaids maintenance and patrol.