Mild temperatures mean high winds at this time of year and as the thermometer climbed to 13 degrees C winds clocked gusts of 100 kph along the coast. Naturally this meant that pilotage operations were suspended all day and will not resume until tomorrow morning at the earliest.

There were very high wind gusts in the harbour and the tanker Avon moved from Imperial Oil jetty 3 to an anchorage in Bedford Basin. 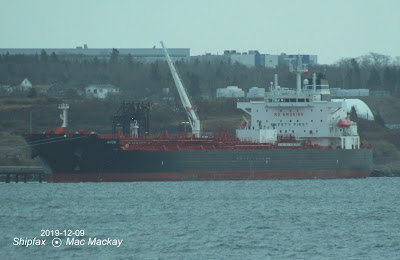 Tugging at its anchor this morning in Bedford Basin.

The wind driven salt spray restricted visibility somewhat but HMCS Shawinigan was able to carry out some exercises in the same area. It was joined by HMCS Glace Bay. 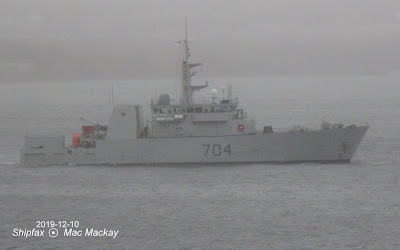 Ships requiring pilots have been standing by off Halifax until conditions improve. The small container ship Tropical Lissette which sailed yesterday afternoon sought shelter overnight in St. Margaret's Bay, anchoring well up the bay off Fox Point all day today and likely all night tonight. The Bay, just west of Halifax, is not a mandatory pilotage area.