Continuing bursts of high winds have been playing havoc with schedules. Gusts were down from the early week's 100 kph to 70 kph last night and weakening today, so ships began to arrive and depart again.

There was lots of splashing this morning as ships arrived in Bedford Basin, facing into northerly winds.

Things were calmer this afternoon at the south end as winds continued to die down. 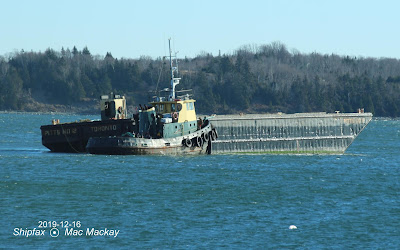 Mister Joe dumped the split hull scow Pitts No.12 without much fuss at the Pier 42 extension.

Tropic Hope arrived to take its place at pier 42 as the pilot boat heads outbound.
(APL Houston occupied Pier 41 from before sunrise until after sunset.)