Some grain for Halifax

Normally when grain arrives in Halifax from Thunder Bay by ship, it is in full loads. However today's arrival of Radcliffe R. Latimer marks a departure from the norm. 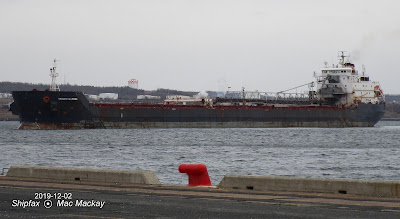 It was quite apparent as the ship approached pier 25-26 that it was carrying less than a full cargo. A little digging revealed that the ship took a full cargo at Superior Elevators in Thunder Bay on about November 21, but on its way down through the Great Lakes it was diverted to P&H's facility in Hamilton, ON where it appears to have left about half its cargo.  P&H Milling [Parrish and Heimbecker] also operate the flour  mill in Halifax (the former Dover Mills) and so perhaps the cargo was kept "in house" so to speak. Nevertheless it is an unusual event. 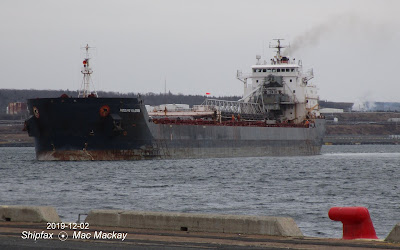 P+H in Halifax brings in most of its grain by rail, so does not depend on ships to keep up its supply. However the recent rail strike may have been a factor in all this. Almost all the grain moving through the port of Halifax is for local consumption either for milling or for animal feed. Some small quantities are sometimes exported for food aid.

Radcliffe R. Latimer is the former Algobay of 1978, extensively rebuilt in China in 2009 and renamed in 2012. It is likely to load gypsum after unloading its grain.