December 26, the day after Christmas, Boxing Day, is almost as sacred as December 25 when it comes to longshore labour agreements, and there is usually no work done in the unionized parts of the port.  Ships do come and go at the non-union oil terminals (Elka Glory sailed from Irving Oil this afternoon) and they can arrive and depart from anchorages. But any activities that involve organized longshore labour incur huge premium charges, so are avoided.

Federal Churchill arrived from Montreal and anchored with the intention to go alongside tomorrow.

Built in 2016 by Oshima Shipbuilding in Saikai, Japan, it is a Seaway-max vessel of 20,789 gt, 34,564 dwt. It passed up the St.Lawrence Seaway in late November, arriving in Hamilton, ON November 30. It lay at anchor there until December 8 then spent until December 18 unloading (probably a cargo of steel). It then sailed for Montreal December 22. 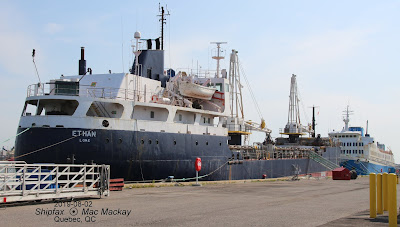 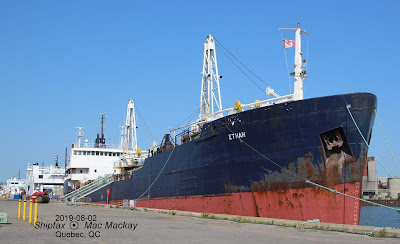 Now registered in Lomé, Togo, the ship is bound for Freeport, Bahamas. So far it has not entered port, but is anchored outside.