Most ships that call in Halifax these days are predictable to a degree. Many are "liners", assigned to a particular container line, and filling a scheduled slot on the rotation with regular calls in Halifax. Therefore today's arrival of MSC Eleni was an odd occurrence. MSC (Mediterranean Shipping Company) is not a regular caller in with its own ships, although it partners with others. The ship normally serves Montreal, and seems to be headed there next, so why it has called here is a question. 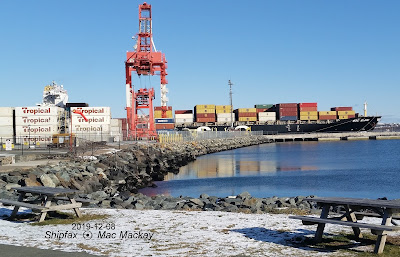 Ships calling for bunkers are also a rarity now that Halifax has no bunkering tanker. However Daisy tied up at pier 27 for that purpose en route from Baltimore for Grande Anse, QC. 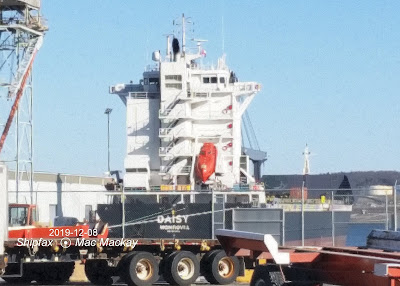 A cell phone, through the fence photo was the best I could do for the Daisy.

Daisy was launched as Beluga Constitution but completed as Beluga Constellation in 2006. The hull was built by Damen's Okean shipyard in Mykolayiv, Ukraine and towed to the Volharding Foxhol yard in the Netherlands for completion. The 10,899 gt, 12,767 dwt ship became HR Constellation in 2011 and Daisy in 2017. Current operators United Heavylift specialize in wind turbine transport, but there did not seem to be much if any cargo on board. Although they are not visible in the photo, the ship carries a pair of 240 tonne capacity cranes.