Another chapter has been added to the saga of Cormorant the former Royal Canadian Navy diving support ship HMCS Cormorant ALS-20. The Canadian Coast Guard has apparently now undertaken to remove the ship which has been lying effectively abandoned, in Bridgewater, NS.

Thanks to Bernadette Jordan, MP for South Shore -  St.Margarets, legislation was finally passed in the last parliament to deal with abandoned vessels. Ms. Jordan is now Minister of Fisheries, Oceans, and the Coast Guard in the new parliament. 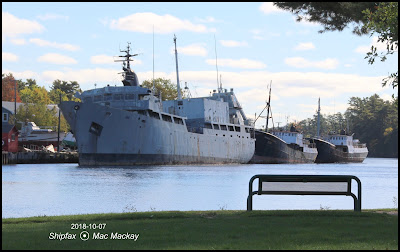 Cormorant was seen as an unsightly addition to the shores of the La Have River.

Built in 1965 by Cantiare Navale Apuania, Marina-Carrera, Italy, as a factory freezer trawler, named  Aspa Quarto, it was acquired by the RCN in 1975. Davie Shipbuilding converted the ship to carry the SDL-1 submersible in a special hangar, and to support its operation using the stern ramp and gantry. There was considerable controversy at the time about the cost of the conversion which incidentally included facilities to accommodate the first women to serve at sea with the RCN.

The vessel was finally commissioned November 10, 1978, and served in a variety of roles for the RCN including the arctic (although it was once holed by ice in process.) Originally 1643 gt, it was listed at 2350 tons displacement following conversion. It was powered by three Mirelli-Deutz diesels, with electric drive to a single controllable pitch screw.

The ship was laid up in June 1997 and paid off July 2. In June 1998 the tug Churchill River (now Mister Joe) towed the ship to Shelburne, NS. Since then there have been several changes of ownership, some disputed, and perhaps some half-hearted attempts to convert the ship to other uses. Since 2000 it has been tied up in Bridgewater and in 2015 it took a 45 degree list. The Coast Guard stepped in at the time to right the ship. The cost of clean up and temporarily securing it was covered by the Ship-Source Oil Pollution Fund, but to be recovered from the owner.

In July 2019 the federal court refused permission to allow the ship to be sold, citing the lack of any evidence that there was a potential buyer, particularly one with the wherewithal to remove and dispose of the ship. The application to sell was seen as a ploy to avoid responsibility for clean up costs. 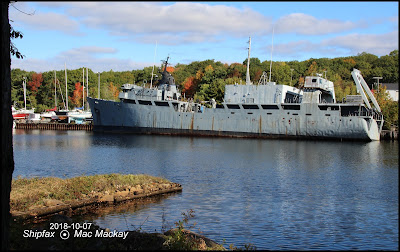 The ship stubbornly insists on listing due to uncontrolled ingress of water from faulty hull fittings and from rain water through other unsecured openings.

Now that the Wrecked, Abandoned or Hazardous Vessels Act has been given royal ascent, the Coast Guard is stepping  up efforts to remove old wrecks. An ad appeared in today's papers for some more hulks in Prospect Bay. More on those in a later post.