PSA Halifax (the terminal formerly known as Halterm) welcomed CMA CGM Tage today. Its early morning arrival in darkness precluded photos, but a view from Dartmouth gave a good idea of the size of the ship. It has been a regular caller on the Columbus JAX service since 2016, and carries the distinction of being the first large split superstructure container ship to call in Halifax. At one time it also held the record as the largest container ship to call in Halifax. 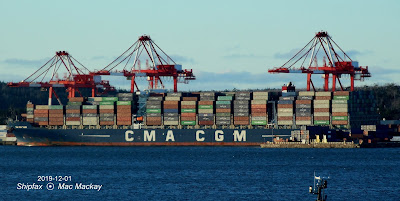 With the its decks piled high it is difficult to find the ship's bridge structure (directly under the middle of the three cranes - between the letters C and M) and its engine casing / funnel (under the tip of the right / northmost, crane.) No wonder some crews are nervous about safety in case of fire on such ships.

For a more conventional view of the ship see: http://shipfax.blogspot.com/2016/10/cma-cgm-anniversary-etc.html
or also this from October 1, 2016:

I believe the ship is carrying at least one more tier of boxes on deck now, and possibly two tiers in places. If so the TEU figures quoted are likely obsolete.