On the 102nd anniversary of the great explosion that killed and maimed several thousand people and  laid waste to much of north end Halifax there were several quiet ceremonies commemorating the event, including in Fort Needham Memorial Park. The explosion shaped the future of Halifax in many ways, not least of Halifax Shipyard. 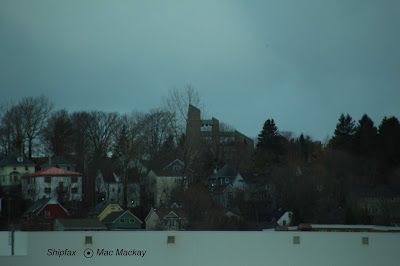 The memorial bell tower on Fort Needham, high above Pier 6.

In 1917 the Halifax Graving Dock Co was a small repair yard. The graving dock itself was an important facility, particularly during war time, where it was able to accommodate military and civilian vessels in need of drydocking. The fire and subsequent explosion that resulted from the collision of the ships Mont Blanc and Imo, took place only 300 meters from the Graving Dock in the area in the Narrows off pier 6 and has become known as Ground Zero.

Remarkably, Samuel L. Brookfield, owner of the yard, was able to get it back up and running within a month of the explosion despite most of the buildings being flattened and the equipment damaged or destroyed.

For his efforts the Canadian government, under Prime Minister Robert Borden (a Nova Scotian) expropriated the shipyard and essentially gave it to a group of Montreal speculators as part of a grandiose plan to built a Canadian merchant ship fleet. The repair yard soon became a fully fledged shipbuilding yard, one of the keystones of the British Empire Steel and Coal Co, and later the Dominion Steel and Coal Co (DOSCO) Canada's largest employer.

It took Brookfield nearly twenty years to have his compensation claim settled in court. The shipyard has off and on been a political pawn and its fortunes have also had many ups and downs ever since. Currently on a roll under the ownership of Irving Shipbuilding Inc, the pier 6 area is just a part of the yard's laydown area, with no special note being made of its importance.

The Narrows and Halifax Shipyard as seen from the Dartmouth shore.
Pier 6 is in the centre of the photo, adjacent to the large building.

This morning, not long after the commemoration ceremonies on Fort Needham, tugs moved the Boabarge 37 from the IEL dock in Woodside to pier 6 9c.

The barge has been chartered by Irving Shipbuilding Inc (ISI) as a launch vessel for the Arctic Offshore Patrol Ships built under the National Shipbuilding Strategy. Its deck currently carries a number of cradles that have been prepped for the roll out of the third vessel in the current shipbuilding program. That operation is expected early in the new year.

In view of the proximity of the explosion, and the loss of life in the shipyard due to the explosion, I hope ISI was able to make some sort of remembrance as part of its workday today.