The BBC Edge arrived in Halifax Monday, docked at Pier 9C and sailed this evening. It did not appear to load or unload any cargo. However while in Halifax, the crew repositioned the pontoon type 'tween deck components back in the hold. They were stowed on the number one hatch (a few are still visible below the forward crane boom) and immediately forward of the house in the photo. The pontoons were removed to create a huge open hold to carry wind turbine blades. 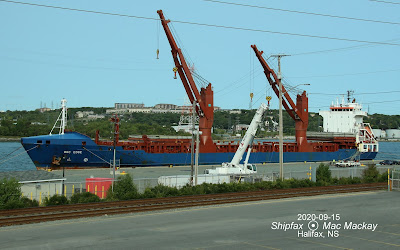 The ship was first noted entering the St.Lawrence Seaway September 1 with a cargo of wind turbines, including blades stowed on deck in special cradles. It off-loaded those September 5-6 at Bay City, MI and returned out of the Seaway at Montreal September 10.

The ship was built in 2009 by the Viana do Castelo shipyard in Spain and is a 8750 gt, 10,382 dwt vessel with a pair of 250 tonne capacity cranes that can perform combi lifts of 500 tonnes.  It was built as Castor J. but was renamed Industrial Edge on delivery. It reverted to Castor J. again the same year. In 2013 it became BBC Pilbara but was renamed Castor J. again in 2014 until 2016 when it became Industrial Edge again. Then in 2019 it became BBC Edge. 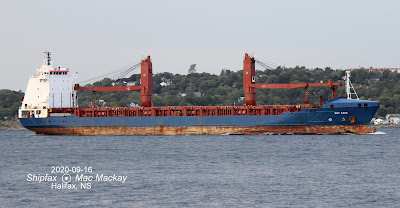 The ship sailed this evening for Willemstad (and the hurricane region). This may explain why they decided to come into Halifax instead of doing the pontoon repositioning at the next port. With the ship in ballast, rolling and pitching around in high seas, the pontoons could come adrift and cause severe damage. It is safer to have them back in the ship's hold.

A fleet mate, BBC Peru is in Montreal tonight awaiting clearance to enter the Seaway and it also has wind turbines for Bay City, and photos indicate it is configured the same way with 'tween deck pontoons stowed on deck.