The Yantian Express got away from Cerescorp, Fairvew Cove this morning and was soon enveloped in fog. 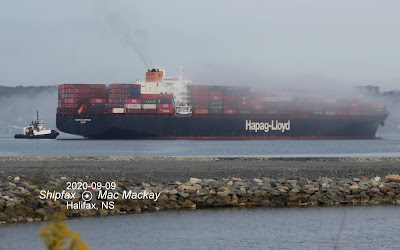 The ship was then virtually invisible as it made its way out to sea. The sun was working hard at eating away the fog as the day progressed.

The ship was launched as Berlin Express, delivered in 2002 as Shangai Express by Hyundai, Ulsan and renamed in 2012. It measures 88,493 gt, 100,003 dwt with a capacity of 7506 TEU including 700 reefers. Ships of more than 100,000 dwt are becoming commonplace at Fairview Cove these days and appear to be close to full laden.