With the arrival of the first 15,000 TEU ship in a Canadian port monopolizing the news today some other harbour activity faded to the background.

This evening the jack-up drilling rig Noble Regina Allen is due to leave port secured to the deck of the semi-submersible heavy load ship GPO Amethyst. 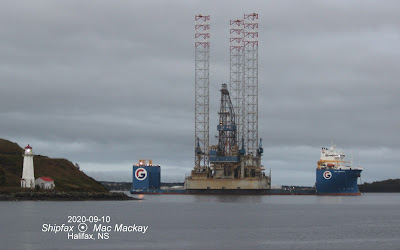 (Above) I could see what looked like welding flashes on deck this evening. 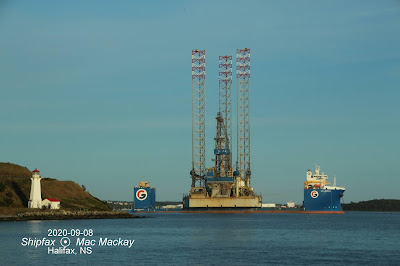 A bit clearer on Tuesday evening.

According to industry reports the rig is going to work offshore Trinidad but will be deployed from Guyana. It is not going to Africa as per some reports. Noble Drilling is emerging from Chapter 11 with a debt for equity deal with lenders.

Earlier in the day the research vessel Ocean Seeker was making its way out of Bedford Basin. The former RCMP Murray is an aluminum catamaran built in 2003. 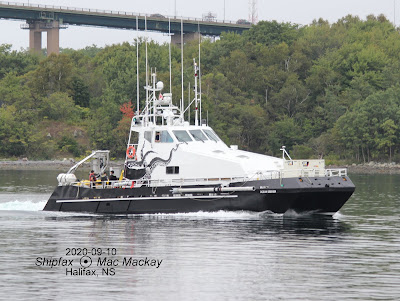 The graphics on the superstructure represent the Kraken, a mythical sea serpent that is the namesake of Kraken Robotics, a Canadian company that has developed high speed towed sonar such as the Kraken Katfish.  Ocean Seeker uses the A-frame for the torpedo like Katfish, and has a "Universal Sonar" mount and pole on the starboard side.
.