Quebec Express sailed today after a lengthy stay. The ship initially arrived at anchor off Halifax about August 19, then entered port August 25 after being diverted from Montreal due to the longshore strike there. See:  http://shipfax.blogspot.com/2020/08/container-catch-up.html

Since then it has been tied up at Cerescorp, Fairview Cove and has been shifted back and forth along the pier to accommodate other ships. It was unloaded and eventually loaded, and finally sailed for London Gateway as HAPAG-Lloyd and partners try to get their schedule back on track. 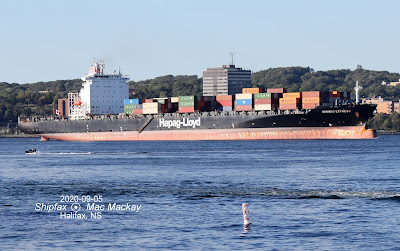