The Royal Canadian Navy organized a ceremonial departure this morning as three ships sailed for the Joint Warrior exercises in Europe. The ships went to Bedford Basin first where they formed up in line then made for sea. There was no doubt a formal salute as they passed HMC Dockyard. With helos buzzing about overhead and even an Aurora aircraft from CFB Greenwood flying past, it was a major send off. 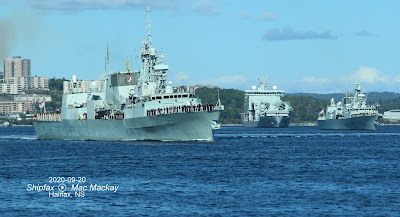 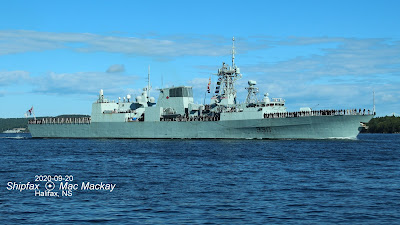 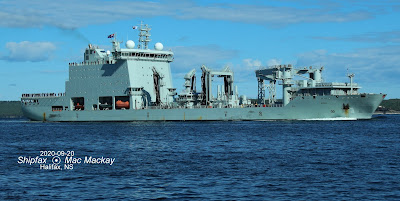 The ships also passed west of George's Island allowing a close up view for well wishers and families on the Halifax side of the harbour.
It was just a month over thirty years ago when there was another major send off in Halifax. On August 24, 1990 three RCN ships sailed for the Arabian Gulf.  Canada joined a 35 nation coalition in the Gulf War., in retaliation for Iraq's invasion and annexation of Kuwait. Canada's contribution was called Operation Friction and was part of the US lead Desert Shield/ Desert Storm. In addition to aircraft, Canada sent three ships from Halifax, andHMCS Huron from Esquimalt, all on very short notice.

It was the first time Canada's military has participated in offensive combat since the Korean conflict, so the sendoff was spectacular, with Sea King helicopters in formation, many spectator craft in the harbour including Bluenose II, and crowds lining the shores.
We should hope that it will not be necessary to go to war again, but is important that the Canadian forces remain prepared. Military exercises are part of that effort, so we wish the participants well and a safe return.
.
Posted by Mac at 12:55 PM