New YM for THE Alliance - CORRECTED

THE Alliance is bringing in different and larger ships these days, with both HAPAG-Lloyd and Yang Ming using ships of over 100,000dwt.  YM Upsurgence arrived last evening and sailed this morning. 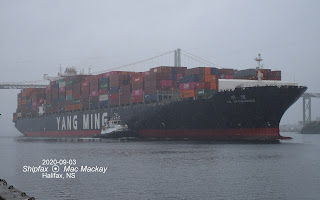 Instead of  In addition to a tethered escort astern, the ship relied on tugs on each side as it transited the Narrows outbound.

China Shipbuilding Corp of Kaohsiung, Taiwan built the 90,532 gt, 103,235 dwt ship in 2012. It has a capacity of 8626 TEU. It is therefore among the largest container ships to use the Cerescorp terminal at Fairview Cove. (The ACL ConRos are still the largest ships.)

Recent press reports have rekindled rumours that PSA, operators of the Southend container terminal, are interested in acquiring Cerescorp's lease on Fairview Cove from NYK. Such a move would perhaps rationalize operations somewhat by concentrating the larger ships at the southend and moving the smaller ships, and those with a lot of truck traffic to Fairview Cove. Certainly ships of the size of YM Upsurgence must be pushing the limits of navigation in the Narrows.