There is a surprising amount of shipping traffic between Halifax and Argentia, in the province of  Newfoundland and Labrador. A weekly container and RoRo service operates also to the French islands of St-Pierre et Miquelon.

Another service operating between Iceland and the United States calls in Halifax and Argentia. One of the ships, Skogafoss arrived this morning. 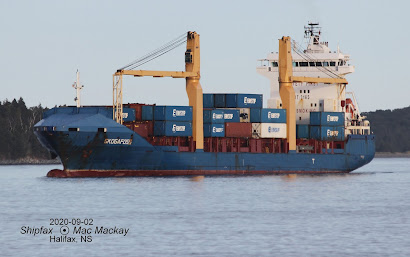 Eimskip, the Icelandic shipping company, usually has a great many reefer containers to carry since fish and fresh produce are the most common cargoes.

A second arrival from Argentia today was a bit more unusual. The Boabarge 37 was returned to Halifax in tow of the Avalon Sea after transferring some heavy crane components to Argentia for storage until next year. The cranes will be installed on the Hibernia offshore oil structure. 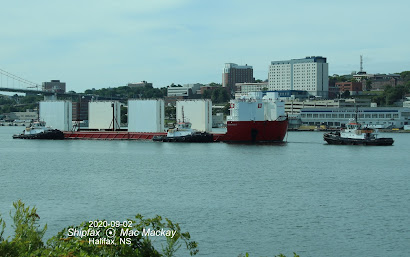 Harbour tugs return the barge to Halifax Shipyard, where it is on long term charter. It is used to float out out new built ships.