Hurricane Teddy passed over Halifax - its centre a few miles offshore - during the night of September 22-23, and made landfall around Sheet Harbour in the morning of September 23. The strength of the storm was significantly less than last year's Hurricane Dorian, but there were high seas and high winds offshore and a storm surge in places.

There was no commercial shipping in Halifax, harbour ferry service was cancelled and two of the RCN  ships that had sailed for Europe returned to port. HMCS Ville de Quebec and Halifax sailed again early today (Sept 23). Asterix took shelter in Newfoundland.

Two offshore vessels remained at sea but took shelter along the coast, Skandi Neptune in Mahone Bay and Atlantic Kestrel well into St.Margaret's Bay, very close to Hubbards. The latter arrived in Halifax this evening. It will be sailing again later this evening after loading Heerema cargo for Deep Panuke. 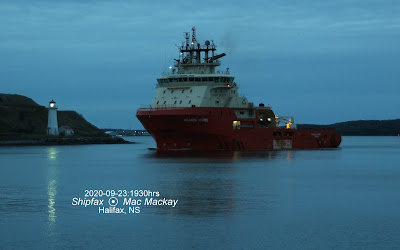 I have hear no reports on how the crane vessel Thialf made out offshore - on the windy side of the storm - as work continues on dismantling the Deep Panuke gas field.
All other commercial traffic has been backed off until tomorrow or by-passed. Oceanex and TSMI will no doubt be delayed as they would have to cross the storm track returning from Newfoundland and St-Pierre.
.