Float Over - all day operation

The process of loading the jack-up rig Noble Regina Allen has been a day long exercise in patience and precision. Staring early this morning, in limited visibility, the ship GPO Amethyst was ballasted down in its position, adjacent to number one anchorage.

The four harbour tugs Atlantic Fir, Atlantic Oak, Atlantic Willow and Spitfire III then attended the rig as its jack-up legs were raised and the rig's hull was floated. The exacting process of moving the rig into position over the ship's hull took the rest of the morning. 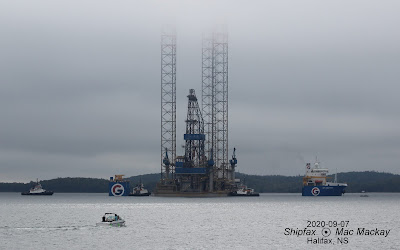 Three of the tugs were sent back to base at about 1300hrs, after the mooring lines were rigged and the ship had control of the rig. Atlantic Oak remained as standby while the rig was positioned with the ship's winches. 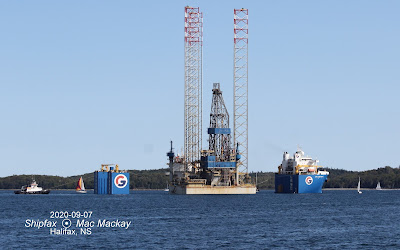 By late afternoon the rig was in final position and the ship could be de-ballasted. It is expected to move back to anchorage number 1 about 2000 hrs. After that the process of final securement to the deck can be completed.

nb Initially posted at 1730hrs - may be updated later.