It happens often enough, but it is still interesting to see two ships from the same line in Halifax at the same time. Today it was two MOL (Mitsui OSK Line) ships, with one arriving as the other departed.

The larger ship MOL Maestro was the first ship in, arriving early this morning. This afternoon, when it was ready to go, MOL Emissary was inbound. To avoid an awkward meet in the harbour, the Emissary sailed straight through to Bedford Basin allowing lots of room for Maestro to sail after it had passed. 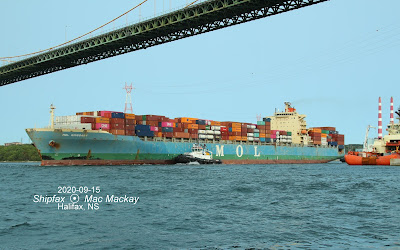 (    If this all sounds slightly familiar MOL Emissary did the same thing June 1 with Atlantic Sail as the outbound ship, and thus a photo from exactly the same position.) 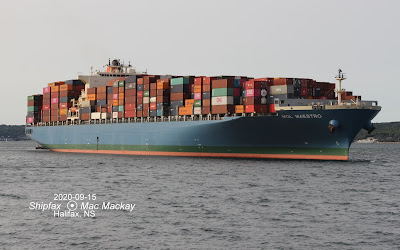 MOL (31%), K-Line (31%) and NYK (38%), the three principal Japanese container lines, merged their container shipping operations to form ONE (Ocean Network Express) in 2017. Existing ships have maintained their old corporate identities but new ships are branded for ONE.