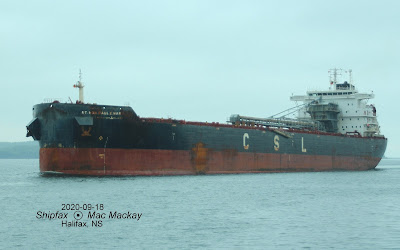 The ship is en route from Sydney, NS where it unloaded a cargo of coal, to National Gypsum's dock in Bedford Basin to load gypsum for the United States.

It is stopping at Pier 9C to load some replacement belting for its self-unloading system. A truck was waiting at dockside and a crane was soon mobilised to load the belts aboard.

The self-unloading system uses the belts to move cargo from the bottom of the hopper shaped holds up to the slewing boom. The rubber belts eventually wear due to abrasion from cargo and from running on the rollers, and require replacement before they break. There is no truck access to the National Gypsum dock and it is necessary to have pier space for the truck and crane.

Rt. Hon Paul E. Martin was built in China in 2012 and measures 43,691 gt, 71,406 dwt and is one of the large Trillium class, some of which are Seaway sized and others, like this one, which is Panamax. Owners CSL Group Inc have the ship in the CSL Americas pool. The ship is named for a former Prime Minister of Canada, who, with his sons, owns CSL.

I suppose it would be too much of a coincidence to be the same one, but a very similar trailer that also had Benson markings was spotted earlier in the day at the nearby Halifax Shipyard. 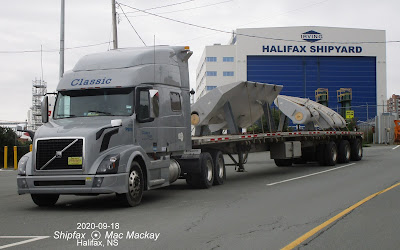 That trailer was carrying a pair of rudders for an Arctic Offshore Patrol vessel under construction at the shipyard. The truck was owned by Classic Freight Lines, which is owned by Cherubini Metal Workers. It is possible that they  built the rudders at one of their plants in Dartmouth.