In what can only be described as heavenly late summer weather, the harbour was chock a block with pleasure craft of all descriptions this afternoon. Ranging from personal watercraft on up, there was plenty of activity in Bedford Basin, the Narrows and the lower harbour. To complicate matters further, there was some sort of regatta or sailing race going on from the Northwest Arm into toward Eastern Passage.

Nevertheless Budapest Bridge was able sail from Fairview Cove to sea without incident. However the ship did have to signal a warning several time with five successive blasts, to clear small craft from its path. 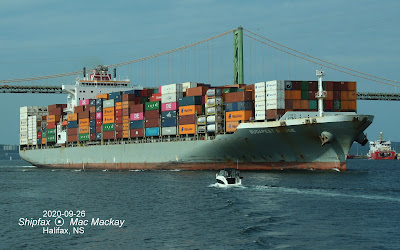 Once the Narrows was clear of commercial traffic Dominion Diving's multi-purpose vessel Dominion Warrior got under way towing a pair of dump scows, assisted as far as Chebucto Head by Halmar. 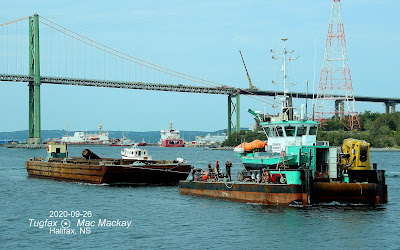 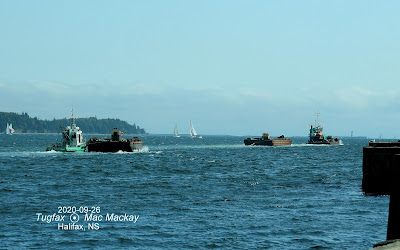 Fortunately no boaters tried to sail between the tows.

The two dump scows, not positively identified, had only just arrived over night in tow of Mister Joe from Port Hawksbury. Mister Joe returned immediately to sea, headed back to McNally Construction's base in Port Hawksbury. The scows are headed for Pinkney's Point, near Yarmouth.