Emerging from the fog

One of the realities about Halifax harbour is fog. Even with relatively warm air temperatures, the ocean remains cold. At time of writing the Herring Cove smart buoy just off Halifax is reporting air temperature of 19.7C and sea surface temperature of 12.4C. With very little wind (7.8kts) and high relative humidity (approx. 100%), conditions are ideal for fog. 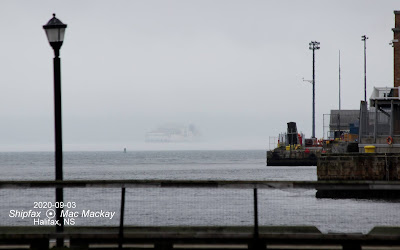 Visibility was reported to be one mile or less in the harbour approaches, and so it was possible to hear the arrival of Atlantic Sun before seeing it emerge from the fog.

Once the ship was in past Ives Knoll it became fully visible even though Macnab's Island in the background was still well fogged in. 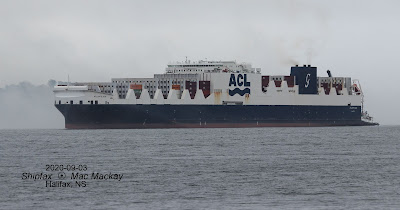 The tug Atlantic Fir tucks in astern to provide braking and steering escort through the Narrows. The irony of the ship's name is not lost as the term "Halifax Sun" means "fog" to some.
Once into the main harbour, the water warms up, and the air clears and there is normal visibility. 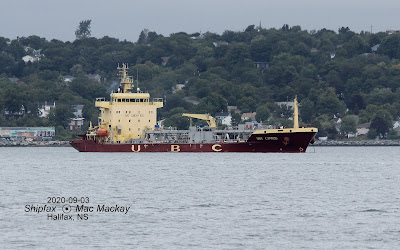 The pneumatic cement carrier UBC Cyprus waits at anchor until it is cleared by the Canadian Food Inspection Agency after Asian Gypsy Moth inspection. Built in 2010 by Huanghai Shipbuilding Co in Rongcheng, China it is a 8559 gt, 15,053 dwt ship operated by United Bulk Carriers.
The ship arrived from Mylaki, Greece and is bound for Montreal. It appears to be loaded despite closer sources of cement, even within Quebec. The ship sailed soon after I took this picture, and soon "vanished" in the fog.
.