Today (October 24) should have been designated "barge day" in Halifax as there was one large barge arrival and one even larger barge move.

The arrival was the barge Glovertown Spirit from Sydney, NS in tow of the tug Lois M. The 2073 gt barge was built in 2012 by Damen Shipyards, Gorinchem, Netherlands for use in the Newfoundland oil projects, and is named for a town on the east cost of the island of Newfoundland. Both barge and tug are owned by McKeil Work Boats GP of Hamilton, ON.

The barge was secured at the Cherubini Metal Workers dock in Eisner's Cove, Dartmouth, to load a bridge built  by Cherubini. 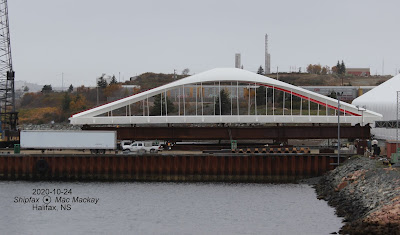 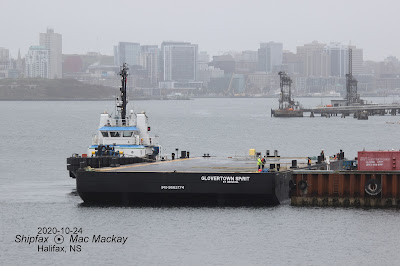 With the Imperial Oil docks in the background, Lois M springs the barge into position.

The second barge is Boa Barge 37 on long term charter to Halifax Shipyard. As a foreign flag vessel, it requires a coasting license to operate in Canadian waters. The current license running from October 15 to November 6 allows the vessel to transport sections of the Arctic Offshore Patrol Ships and cradles and trestles from the shipyard's Woodside fabrication facility to the main yard. Six units and 27 cradles totaling 503.044 tonnes are to be moved using wheeled transporters to drive the components on and off the barge. 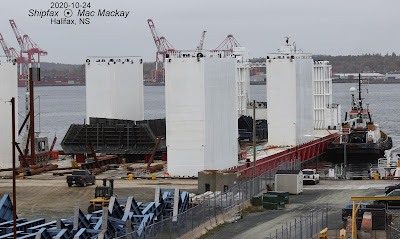 Although the barge is semi-submersible, that capability will not be needed for this move. However its ballasting system will be used to ensure that the barge deck is level with the dock.