Dominion Diving's workhorse vessel Dominion Victory has been at work in Bedford Basin in an area known as Jonquière Bank.  Along with the barge Dominion Jupiter there is some sort of underwater activity going on in relation to the Royal Canadian Navy's test anchorage area. It seems that every year or so there is a lengthy project on the bottom, usually involving several Dominion Diving vessels. 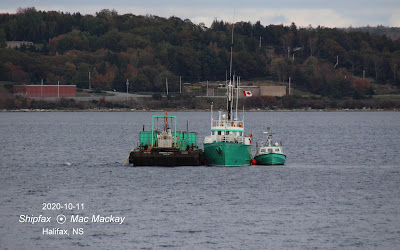 Navy ships sometimes anchor nearby for testing. There are several sound ranges in the harbour - mostly off York Redout where there are static and dynamic sound ranges - and nearer to BIO. These may or may not be connected to the DRED barge anchored off Birch Cove which is used for Sonar work.

The name Jonquière seems somewhat out of place in Halifax harbour since it is the name of a Governor of New France from the 1700s, but there is a good reason.

In 1746 the Duc d'Anville headed up a huge fleet of 64 ships and 11,000 troops that set out from France to retake Louisbourg and drive the British out of Acadia (mainland Nova Scotia). Through a combination of incompetence and bad luck the expedition was a fiasco. The ships were badly damaged by storms, delayed for weeks by calms, and when 44 ships finally arrived in what is now Halifax harbor hundreds of the crews and troops had already died from from scurvy and typhus, and most of the rest were ill.

The fleet sheltered in Bedford Basin (which they called Beaubassin), landing the sick at Birch Cove (and thus infecting the indigenous population). The shallow area where they anchored is now known as Jonguière Bank.

D'Anville soon died, his successor was unable to mount a successful offensive, and retired. By this time a force of New Englanders had arrived in Nova Scotia to counter De Ramezay's force from Quebec.

Jacques-Pierre de Taffanel de la Jonquière, governor of New France, and also a naval officer of some note, was left to command the weakened force and ordered its return to France. He was blamed for abandoning the Acadian population to the eventual expulsion by the British.

Jonquière's term as governor ended in 1752. However he was revered enough in New France that a new settlement in the area near Chicoutimi, QC was named for him. (Several municipalities, including Jonquière and Chicoutimi were merged to form "Saguenay" in 2002).