Despite the global pandemic shipyards are still managing to deliver some new ships to shipowners. Two ships dating from 2020 are in port today. 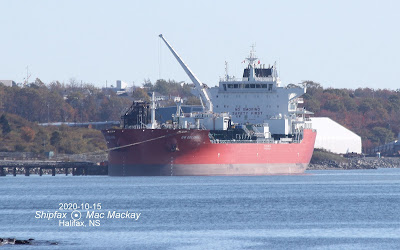 The tanker  GW Dolphin arrived at Imperial Oil from Antwerp. The ship was built by Changxi Shipyard in Jiangyin, China and measures 34,998 gt, 55,604 dwt and was delivered at the end of June. Imperial Oil imports most of its fuel products for Halifax and the maritime provinces from Europe, and receives very little from Canadian refineries. Thus several Canadian product tankers, such as Algoscotia and Mia Desgagnes are laid up.

Grande New Jersey arrived at Autoport on its first trip. The ship was delivered September 4 by Yangfan Shipbuilding in Zhoushan, China. It is the fourth in a series of seven new autocarriers for the Grimaldi Group. (Grande Halifax, Grande Baltimora and Grande Torino have all called in Halifax.) 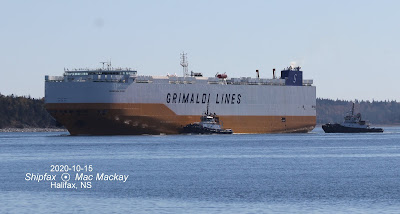 The 65,148 gt, 15,853 dwt ship has a capacity of 7600 CEU (car equivalent units.). It has been assigned to Grimaldi's 15 port Mediterranean/ North American service that originates in Italy and extends to Mexico. Its last port was Savona, Italy and is bound for Davisville, RI.