The second of the new Canadian Coast Guard Bay class lifeboats, Florencia Bay arrived in Halifax late this afternoon (October 13) in advance of some stormy weather. 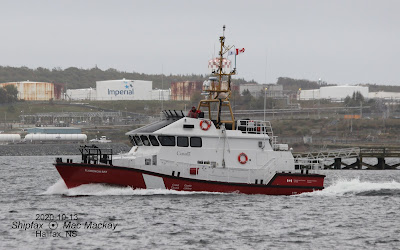 Not quite as nice a day as it was for the arrival of its sister Cadboro Bay yesterday (October 12), nevertheless the crew conned the boat from the flying bridge. It must have been a bracing trip, racing  along the eastern shore in excess of 20 knots to get in ahead of weather.
Hike Metal Products in Wheatley, ON built the Florencia Bay, which has been delivered all the way to Halifax on its own hull. It will be stationed in British Columbia and is to be transported to the west coast by heavy lift ship.
.
Posted by Mac at 6:38 PM