The dearth of posts in the last weeks has been occasioned by a lack of interesting activity in Halifax harbour. The (Canadian) Thanksgiving holiday (October 12) may be part of the cause, but blanked sailings due to hurricanes to the south may also be a factor. It may also be no coincidence that there is still a cargo backlog at both container terminals* left over from the Montreal longshore strike last month. 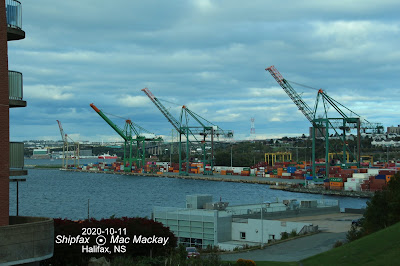 Some partial relief for the latter is on the way as the container ship Glasgow Express is due October 12 at Fairview Cove* to load "stranded" imports left over from that strike. The ship arrived in Montreal October 6 on its regular schedule and unloaded, sailing for Halifax October 8. It will load in Halifax October 12 -13 and return to Montreal October 16 to unload, then load its regular cargo, sailing October 21.

Speaking of the two container terminals in Halifax, it has recently been revealed that PSA, operators of the southend terminal (formerly Halterm) have purchased the Fairview Cove assets from Cerescorp. When they acquired Halterm from Macquarie last year they renamed it PSA Halifax. No announcement has been made yet on a rename for Fairview Cove. Let us hope for something more original this time. Some rationalization of activity is also expected as Fairview has lots of room to expand. However bridge heights restrict access to "smaller" ships.

One other activity of note in the harbour is the gradual demolition of the "tug docks" on the Halifax side of the harbour. 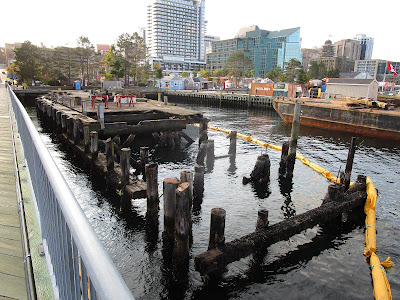 The salvage shed is gone now and the pier is being dismantled. The main pier will soon follow. 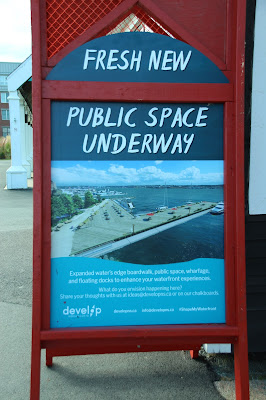 The Foundation Company of Canada acquired the dock, which was called the Mitchell pier, when they purchased the Halifax Towboat Company in 1936. It was successively owned by Eastern Canada Towing Ltd (ECTUG) from 1971, then its successor Svitzer Canada Ltd. Develop Nova Scotia (the former Waterfront Development Corp) is the current owner. As part of the redevelopment the pilot boats have moved their base to the former Fader Agency dock, now expanded, just south of the Macdonald bridge in Dartmouth.
The main pier will be rebuilt as the base for more seasonal marina docks, but activity on the water side will be minimal and strictly non-commercial.
.