The unscheduled arrival of the autocarrier Horizon Highway was brought about by a power failure of some sort about 120 miles off Halifax. The tug/supplier Siem Commander was dispatched early yesterday morning (October 19) to the disabled ship and towed it into port this morning. 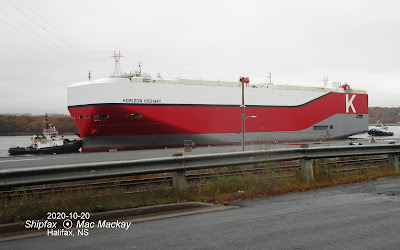 Once inside the harbour the tow was passed off to three harbour tugs, but Siem Commander stood by until the ship was secured at Pier 9C. Spitfire III took the bow tow line and Atlantic Fir and Atlantic Oak made up near the stern.

It is not often that we see autocarriers in the Narrows, since their usual berth is at Autoport, but if the ship does not have any cargo for Halifax there would be no need to tie up at Autoport. Pier 9C is a good location for a possible long stay for repairs.

The ship's last port is given as Southampton, UK, and it was bound for US east coast destinations.

Thanks to an alert Shipfax reader in Australia who noted the ship's "not under command" status on AIS I was alerted to the ship's arrival and managed to reach the Narrows in time to see its arrival.